by Satu and John

On February 14, 2012, in the small village of Twael of the Aqraba district, southeast of Nablus in the Jordan Valley, the home of the Bunni Jaber family was destroyed by an Israeli backhoe protected by 20 soldiers in four military vehicles. Two men from the family were arrested – Ayman Bunni Jaber, aged 36, and Rafie Bunni Jaber, aged 30. The family’s tractor was also confiscated by the Israeli authorities.

The Bunni Jaber house was located along the green, rocky hills that dominate the landscape here, built from cloth, plastic sheeting, wire mesh, stones, and dirt. There are four children in the Bunni Jaber family, ranging from toddlers to adolescents. The family are herders, with flocks of sheep and goat, and the arbitrary confiscation of their tractor presents a serious challenge for the family’s livelihood. 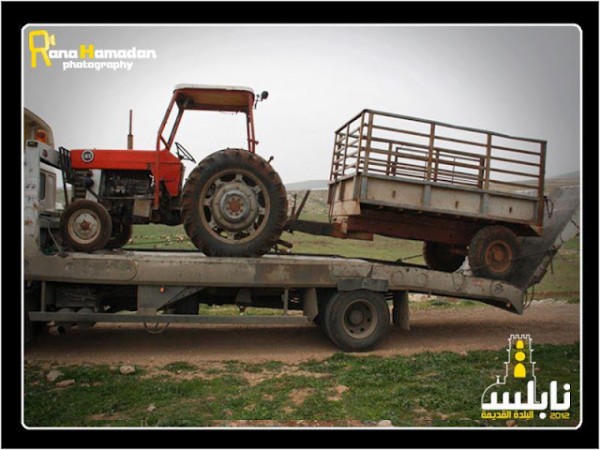 The reason given for the demolition was the house’s construction without a permit in Area C, the part of the West Bank under full Israeli civil and military control. The land belongs to the municipality of Aqraba, and is used for agriculture and herding. Obtaining a construction permit in Area C is a near impossibility for Palestinians. According to the UN agency OCHA, 96 percent of request for building permits in the Jordan Valley between 2000 and 2006 were denied. Nineteen of the 22 houses in the area have received demolition orders, as has the local mosque. Many of these have been demolished, some multiple times after reconstruction by their owners.

By longstanding local custom and law, houses without concrete or foundations like that of the Bunni Jaber family, do not require a building permit. Eighty percent of the land in Aqraba has been confiscated by the Israeli Army under the auspices of its use as “training grounds,” even though land seized is in fact stolen by illegal Israeli settlements. The villagers have resisted through various means, including a one-day hunger strike.

Satu and John are volunteers with International Solidarity Movement (names have been changed).