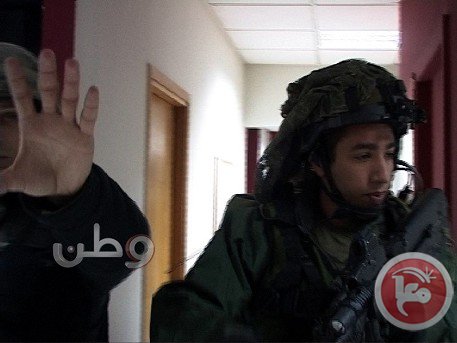 Soldiers confiscated computers used by editors and reporters in Watan TV’s newsroom and general offices as well as administrative and financial files, the network said.

“This attack is nothing but piracy under a policy of systematic attack targeting Palestinian media organizations and journalists,” Watan TV said in a statement.

The network “deplores this aggressive behavior against an efficient and effective media organization,” and said it will restore the stolen equipment and transmitters and to try to resume broadcasts.

An Israeli army spokeswoman said soldiers were accompanying an operation by the country’s communications ministry, which had determined that the networks were broadcasting illegally.

They had been asked to cease their broadcasting “which significantly interrupts other legal broadcasting stations,” an army spokeswoman told Ma’an. “During the operation and in accordance with law, the communications ministry confiscated several transmitters.”

Abu Irreh of Al-Quds Educational TV called the events of Wednesday morning “harassment to media and education stations and a way to shut the mouths of media and reporters.”

Palestinian lawmaker Mustafa Barghouti condemned the raids in a statement.

“This act is not only a violation of human rights and humanitarian law,” he said, “but also a breach of the agreements that forbid the Israeli military forces from entering or carrying out operations” in Area A.

“We will campaign worldwide to repel the Israeli aggression,” he said.

They were released after several hours, the network said.