On February 5 the residents of Kufr Qaddoum noticed several soldiers and illegal settlers on their lands who were plotting how to illegally seize land from the village. Upon arrival, International Solidarity Movement received word that indeed the colonizers were planning an action to seize land today. 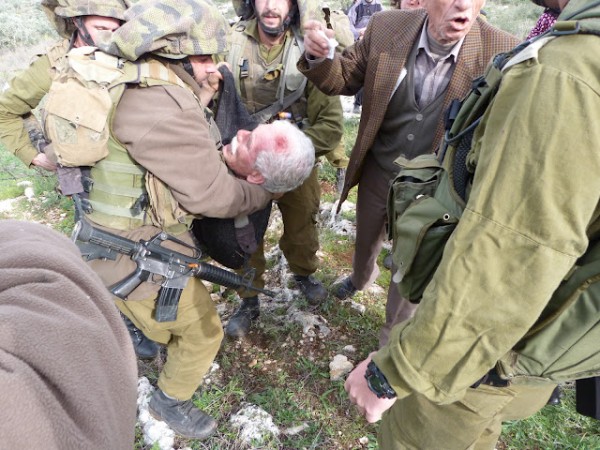 Early this morning over 20 Israeli soldiers and Zionist settlers descended up on Kufr Qaddoum’s lands, arresting local villager Abu Ashraf, and dragging him off. Settlers were seen plowing through the land with bulldozers and military present.

In a collaboration between military and illegal settlers,  the main road that Kufr Qaddoum has been advocating to open through its weekly peaceful demonstrations has also been reportedly seized, while illegal, Zionist settlers are currently planting trees in the newly plowed land under the protection of the Israeli military.

Every Friday Kufr Qaddoum has held peaceful demonstrations to reopen their main road. On January 21 the village celebrated their success in peacefully pushing back Israeli Occupation Forces for the second week in a row as they tried to reclaim access to this road.

Kufr Qaddoum  is hedged in on most sides by Israeli Jewish settlements, illegal according to international law, the 1993 Oslo Accords, and in some cases even Israeli law.