The mood was celebratory following the weekly protest this Friday in Kufr Qaddoum, after demonstrators succeeded in pushing back Israeli soldiers for the second week in a row. The goal of the protest was to open the main road to regional population center of Nablus, closed since 2003 by the Israeli Occupation Force in spite of international and Israeli courts demanding its reopening. Though the soldiers greeted unarmed protesters with scores of tear gas canisters–many at eye-level, an illegal tactic intended to severely injure and kill–no injuries were reported, and in the end soldiers, and not villagers, withdrew. 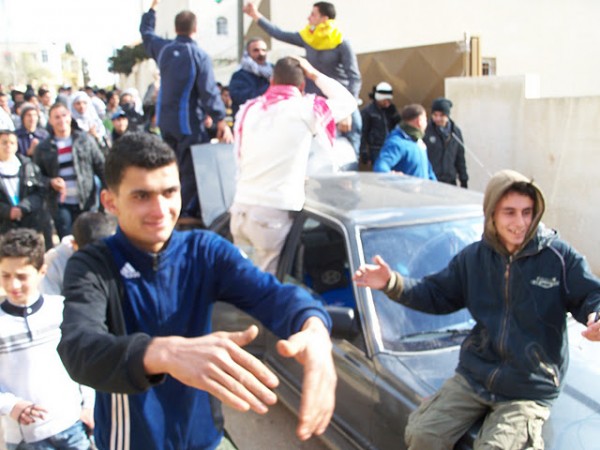 A Palestinian village in the West Bank existing since biblical times, Kufr Qaddoum (“koo-fur ka-doom”) is hedged in on most sides by Israeli Jewish settlements, illegal according to international law, the 1993 Oslo Accords, and in some cases even Israeli law. Theft of nearly 2/3 of land associated with these settlements (1100 ha of the 1900 ha pre-1967 original), combined with the Apartheid Wall and closures of multiple access points in the last 12 years, have choked the local economy and driven people from the community (according to POICA and the Land Resource Center). During 2003, in the midst of the Second Intifada, the Israeli military closed off the main road leading to the village, doubling the transit time to Nablus. After 6 years of court cases and a ruling supportive of villager’s rights–but still no results–the Popular Committee of Kufr Qaddoum decided to press the issue with a series of weekly protests which began in July, 2011.

The protest began as usual, after the Friday morning prayers, with upbeat music and a crowd of children, teens, adults, and elders from the village waving flags, singing, chanting—along with journalists and at least 20 Israeli and international solidarity activists. As the marchers neared a barbed wire barricade, gas-masked and heavily armed soldiers were visible not only lined up further on the road, but in numerous flanking and sniping positions up the hillside, which is controlled by the Israeli Occupation Forces. As protestors marched closer, without any verbal warning, soldiers began firing tear gas canisters at high velocity towards protesters, which ricocheted off village walls and bounced into yards. Extremely hot, noxious, and dangerous, tear gas canisters typically cause eye pain, respiratory difficulty, and when aimed at people (such as Friday) severe impact injuries or death. Having been fired upon, Palestinian youth and adults took up stones and lit small fires to symbolically hold ground and drive back the soldiers. After numerous volleys back and forth and a Palestinian advance, a warning was made that if protesters continued forward, more soldiers would enter the village from behind, where most of the younger children and women typically remain throughout the protest (a tactic used in other villages like Nabi Saleh and Ni’lin).

After the protesters chose to hold their position the soldiers withdrew, leaving Palestinian youth and adults singing and dancing back to the village, under a bright sun and dissipating clouds of tear gas.

According to Murad, a Palestinian resident and activist of the village, this last demonstration was a definite though incomplete success—in part because of the size (about 350 in a town of 3500) and in part because they were able to continue forward as far as they did without giving up. Although protesters did not continue up the road, Murad did not regret the decision.

“We do not fear anything they do to us,” he said, “but they wanted to enter the village, and we want to keep our people safe.”

Yet asked whether the continued protests would open the road, Murad’s answer was, “we don’t feel anything [has changed].” According to Murad, the Israeli military has told villagers that it is “looking for other solutions.” “But we don’t need any other solutions,” he added, “other than the main road.”

Mahmoud Shaker Kadoumi, another participating resident of Kufr Qaddoum, also saw the protest as a success, but also spoke of its costs to the community.

In the last 6 months, [the demonstrations] have become a habit every Friday…and every Friday—tonight there will be arrests of young people. Two weeks ago, after the protest, at midnight the soldiers knocked on doors, entered houses and arrested two young people. [Soldiers} said they were “throwing stones.” They will be held 4, 6, maybe 8 months.

Although night raids and arrests against Palestinians believed to be activists and/or stone-throwers are common in the West Bank, the regularity of arrests in such a small community takes a certain toll.

But so also does the economic and social damage of an occupation, which like in other parts of Palestine, has led to a large emigration from the village—according to Murad emigrants of Kufr Qaddoum and their children amount to many times the current population of the village—a trend reflected in other villages and occupied Palestine as a whole. According to BADIL Resource Center for Palestinian Residency and Refugee Rights, 7.1 of 10.1 million Palestinians globally are refugees in 2010 (some internally displaced), and of those, 5.2 million live outside the boundaries of historic Palestine. While specifics of diaspora histories of the Nakba (1948 partition) and 1967 are contested—loss of land, work, accessible roads, and markets, together with military and political repression have driven wave after wave of emigration. While Kafr Qaddoum’s residents may not have ended the Occupation  on Friday night or resolved their village’s economic concerns, they did take a little bit more of their road back for a few hours. The message of these protesters was clear: small victories are still victories and must be celebrated.