When my friend and I decided to walk downtown, we didn’t expect that this walk could be dangerous. There was a funeral going on for a settler woman who had been killed by her ex-husband, who in turn committed suicide.

First we passed about 3 Israeli military jeeps and a couple of soldiers, and we followed the road inbetween two graveyards leading down to the Gilbert checkpoint.

When we arrived, there were many military cars and about 30 soldiers crowding the area as illegal settler cars and buses were coming and going.

Settlers were inciting Palestinians, by aggressively cursing at them and flashing lude  gestures. But Palestinians were calm and did not react. 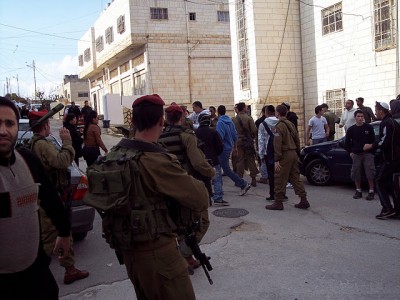 After two buses came there were too many settlers. Some came from Kiryat Arba, where the deceased settlers were from, while other buses came from Shuhada street.

A settler spit on a Palestinian man, who also returned the gesture, causing a fight.

“After the Palestinian spit back, settlers started to beat all the Palestinian around. All the settlers came down and very angrily started to attack everyone. I saw how they attacked internationals and smashed their cameras, and some Palestinians were bleeding.  Of course soldiers didn’t arrest any of them, they tried to arrest me and some of my friends,” said Issa Amro, a local Palestinian activist who tried to stop settlers from causing clashes.

Soldiers did not try to stop the settler who started the fight; instead they tried to arrest the Palestinians who were attacked. More and more settlers were running down from the graveyard and attacking all non Jewish people in the area. About fifty individuals were targeted by the settler violence, while women retreated into their homes for shelter. Palestinian men were actively seen defending themselves without causing transgression. After all, anything slightly malleable to mean “fighting” could have landed any of them in prison.

After our camera was smashed and settlers still wanted to beat us, we had to run away.

“I felt really scared when settlers were attacking me and the soldiers just supported them. When they wanted the card from my camera, they just smashed it. It was really horrible, when I realized that the soldiers are with the settlers, instead of protecting the people. I was so scared that they were gonna lynch us,” said one international activist, who wished to remain anonymous.

“I was so helpless and powerless, when I had to fight for my life and saw all that anger from settlers who were supported by the soldiers,” said another international activist, also wishing to remain unnamed.

Palestinians from about 5 households had to lock themselves in to avoid the settler mob. Afterwards the soldiers invaded the houses and took position to attack, stationing themselves atop the roofs of Palestinian houses.

After twenty minutes, when the situation became better, we wanted to go back and help the people that were in the houses, but soldiers didn’t let us go down and when they saw that we didn’t have our camera any more, they started to push us and beat and jab us with their riffles. One of them charged like a bullet into the room, pointing at us with his gun as he yelled, “I am gonna kill you all!”

Soldiers didn’t have the situation under the control and were out of their minds.

“When one of them went mad, and charged the riffle and pointed it at me I believed, that he was gonna shoot,”  an activist said.

The atmosphere here in Khalil and all West Bank is escalating. Only this week the settlers burned two mosques, and last week they attacked a family and burned three houses.

This is evidence of apartheid here in Khalil, where there was so many soldiers who are not even aloud to arrest the settlers at all according the Israeli law.

Fida Far is a volunteer with International Solidarity Movement.