Israeli military drags its boots and guns into Ibrahimi Mosque 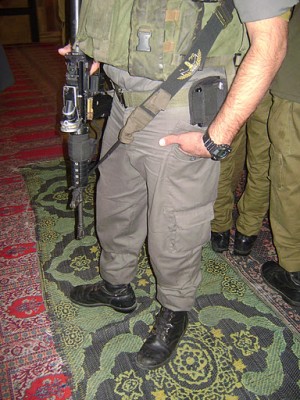 Soldiers from the Israeli military entered the Ibrahimi Mosque located in the Old City of Hebron on December 21 in the afternoon. Male and female soldiers entered the mosque and the men’s place for prayer in what appeared to be a tour of some kind. It is a custom within Islam to take off shoes and for women to cover their hair when entering a mosque. Despite this custom, soldiers did not take off their shoes and female soldiers in the group did not cover their hair.

Furthermore, two of the soldiers where heavily armed in order to “protect” the group of soldiers. International volunteers from the ISM who happened to be in the mosque at this time asked soldiers why they entered the mosque. The soldiers responded that they “wanted to visit the mosque.”

ISM volunteers further questioned the soldiers’ choice to enter the mosque with shoes and weapons, and why the female soldiers did not consider the custom to cover their hair, but were refused an answer.

The refusal of the soldiers to consider religious customs while walking into a religious sanctuary should be put in the context of the Israeli occupation of the West Bank which is illegal under international law.

Recently, soldiers stationed in the occupied area of Hebron known as H2 have raided several homes, entered Palestinian property and either participated or done little to stop escalating violence and harassment committed by Israeli settlers living in the area.

http://www.youtube.com/watch?v=okoiSEvG-98?rel=0 After settlers occupied the parts of the Old City in the city centre of Hebron in the middle of the 1970s, Israel has imposed several apartheid laws including a heavy military presence, watchtowers, checkpoints, street barriers, road closures, house evictions and forced displacements  which aims at restricting and controlling Palestinians only. 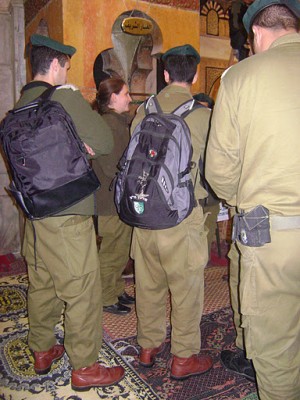 While soldiers and settlers move around freely inside the occupied area, Palestinians who want to enter the mosque, face many difficulties as a consequence of these restrictions and apartheid measures.

ISM consider today’s event and the obvious neglect of religious and cultural customs a severe violation of Palestinian human dignity and integrity.