Family fears their son is dying within Israeli prison

Mohammad Awad is a 16 year old Palestinian boy, he is in an Israeli jail and he is gravely ill – his family believe that he is not receiving the right treatment and that he may be dying.

As they sit in their house in Beit Ummar, a village near Bethlehem,  Mohammad’s parents Ali and Amina, grow visibly angry and distressed as they recount their son’s treatment. 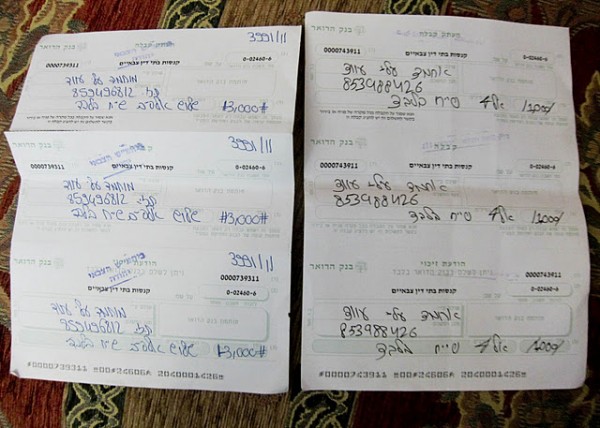 Documents showing the fines that the Awad family must pay to secure the release of their sons Mohammad (left, 3000 shekels) and Ahmad (right, 1000 shekels).

“He has fever, he sweats very much, he can’t sleep on the bed – he has to sleep on the ground to get some cold – he overheats and he cant move at all” says Ali.  Despite the fact that he is barely eating, Mohammad’s weight has ballooned from 58kg to 92kg since he has been in prison.

Mohammad suffers from Familial Mediterranean Fever (FMF), an inherited condition characterized by recurrent episodes of painful inflammation in the abdomen, chest, or joints. These episodes are often accompanied by fever and sometimes a rash. Without treatment to help prevent attacks and complications, a buildup of protein deposits (amyloidosis) in the body’s organs and tissues may occur, which can lead to kidney failure or congestive heart failure. 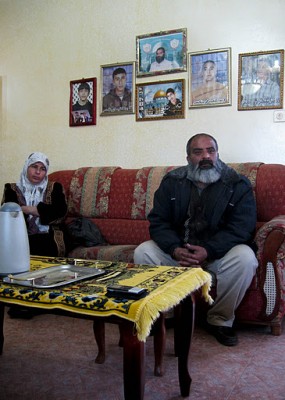 Amina and Ali Awad – parents of Mohammad – at their home in Beit Ummar.

Ali says that Mohammad was first arrested in February 2011 after he attended a peaceful protest in Beit Ummar.  He was severely beaten by Israeli soldiers during his detention and was subjected to extreme cold.  Amina says, “They beat him so badly, and he was shouting and screaming and crying ‘Please stop you’re hurting me’ but they said ‘no’.  I believe that is the cause of his current condition – he had the fever [FMF] in the past but it was not serious as the thing he has now.”

Ali added that, ” When he told the solider that he had hurt him in the waist they beat him again and again on purpose in his liver and they caused internal bleeding.”  The bleeding in his liver was so severe that Mohammad required a blood transfusion.  He was released from prison in June, only to be arrested 14 days later and sentenced to six months imprisonment for attending a demonstration in the village and throwing one stone.

Mohammad is currently being held in Ofer Prison but the family has learned that he has been repeatedly sent to hospital at Ramle or Hadassah during the past two months and then returned to prison.

In the immediate family, only Mohammad’s sister Rahaf, 7, has been allowed to visit him.  She first alerted the family that Mohammad’s condition had deteriorated when she visited him in prison with a cousin – she returned saying that her brother was swollen and dreadfully ill.

On 2 November 2011, Mohammad had a court hearing which his mother attended – but Mohammad was not in the court. “We didn’t get information why he wasn’t there,” said Ali,  “but the manager of the prison himself came to the judge – we knew this from the lawyer – and told the judge that [the prison] can’t be responsible if anything happens to Mohammad, [since] he’s now in hospital, in very bad condition, and we recommend  that we release him.”  The judge also recommended that he be released, but he needed approval from the Israeli intelligence – and they refused.”

According to Ali, “The manager of the prison himself called [him].”

“He told me, ‘your son is in a very bad condition and we can’t do anything for him so I will try to release him to be treated on the Palestinian side.’ So I’m afraid that my son is dying.”

Amina last saw her son in court on 28 November 2011. “He was very bloated and swollen all over his face and body, and it was not normal at all.”

Mohammad’s parents believe that the prison authorities have been giving Mohammad the wrong treatment that may be harming him even further. “When he was released for the first time, he smuggled some drugs out that he was being given [in prison]” says Ali, showing ISM the Allopurinol tablets given to Mohammad.  “We asked a doctor what these was for, and he said these pills were for another disease, not for Muhammad’s condition.  The doctor told him that it is vey dangerous to take this drug, and we’re sure now that they are giving him the same drug.”

The family has asked the prison authorities for Mohammad’s medical reports but they have refused to produce them.  There is no cure for his condition but when he was out of prison Mohammad was taking Colchicine and antibiotics to manage his symptoms.  Yet his rapidly deteriorating health and the statements from the prison manager suggest he is not receiving the correct medical attention.

The Israeli team of Physicians for Human Rights has attempted to visit Mohammad in prison but has so far been denied access by prison authorities.  The Israeli human rights organization B’Tselem picked up some medicine for Mohammad but was also denied access to the prison by the Israeli authorities. The family claims that they have not been able to give him any supplies at all whilst in prison.

Mohammad is due to be released on 22 January 2012 – however, the family must pay 3000 shekels as a fine to secure his release.  If they are unable to do so, he will serve a further three months in jail.  His parents believe that his life is in danger and if he spends much more time in jail, without receiving correct treatment, the likelihood is that he will die.  Mohammad’s brother Ahmad is due to be released from prison in three months but the family must find a 1000 shekel fine to secure his release, otherwise he will serve an extra month in jail.  Ahmad also suffers from Familial Mediterranean Fever but his health is much better than Mohammad’s.  If they do manage to pay the fines, the Palestinian Ministry of Prisoners usually pay it back – but Ali says this only happens around three years later.

As Ali shows us the documents from the military detailing the fines, he says that he doesn’t have the money and has no way to raise it as he is currently unemployed. “We are suffering from a very bad economic situation” he said. “I cant work inside settlements or inside the green line and most of the work is there. Also I am ill – I have asthma and I have heart problems now and can’t work.”

The targeting of the family

Mohammad’s parents have not been allowed to visit him in prison and they have difficulty getting information.  Two of Mohammad’s brothers, Saddam, 21, and Ahmad, 19, are also in prison.  Mohammad’s younger brother Hamza, 15, is not allowed to visit. When he was 14, he visited Mohammad during his first sentence, yet Israeli authorities detained and interrogated him for three days and then banned him from visiting in the future.

Now that all of his brothers are in jail, Hamza is terrified that he will soon be arrested.  At night he paces around the house, looking out the windows for the Israeli military.  “I am very depressed,” said Hamza, “I don’t have any hope that I will stay here at home, the Israeli army can come here at any time and detain me and take me to jail.”

The military has arrived in the night to arrest members of the family before – Ali has been detained eighteen times, although he claims that he has only resisted the occupation nonviolently by attending peaceful protests.  “The detention of our children caused a medical condition for my wife,” said Ali – “She takes drugs for her nerves as she’s always worried and the doctor told her this is very serious.  She’s on medication for anxiety and depression.”

The UN Convention on the Rights of the Child defines a “child” as “every human being below the age of eighteen years.”  According to Israeli military order 132, Palestinian children aged 16 and older are tried and sentenced by Israeli military courts as adults. By comparison, juvenile legislation defines Israeli children as age 18 or younger. A Palestinian child’s sentence is decided on the basis of the child’s age at the time of sentencing, not when the alleged offence was committed.

According to Addameer,  a prisoner support and human rights organisation, there were approximately 176 Palestinian children (under the age of 18) detained in Israeli prisons, as of September 2011 and around 700 Palestinian children from the occupied West Bank are prosecuted every year through Israeli military courts. Since 2000, more than 6,500 Palestinian children have been detained.  The most common charge brought against children is for throwing stones – an offence which can incur a 20 year prison sentence.

Addameer reports that “the majority of children report being subjected to ill-treatment and having forced confessions extracted from them during interrogations. Forms of ill-treatment used by the Israeli soldiers during a child’s arrest and interrogation usually include slapping, beating, kicking and violent pushing. Palestinian children are also routinely verbally abused.”

With three of their four sons in prison, it seems that the family has been singled out and targeted by the Israeli authorities.

“All Palestinians are targeted, not just my family” said Ali. “But from the first Intifada I have been a member of a legal movement – I’m not doing anything illegal, I’m just demanding my people’s rights. I don’t do anything to hurt anyone, I just demonstrate.”

Amina says that she believes that the Israelis are doing this as “revenge.”  “My sons are innocent and they don’t do anything bad.”  Ali added that he believes it to be “revenge against all Palestinians, but we are a special case as I was detained [so often] in the past. Also I have land near Karmei Tzur [an illegal Israeli settlement] and they are trying to take this land.  They have made me many offers to buy the land and I refused so they hate me. I told them go to hell this is my land I will stay here, and I will die here.”  Ali also shows us the protruding bone in his hand which was broken by the Israeli military a few months ago after he was detained during a peaceful protest in Beit Ummar.

Ali is trying to stay hopeful but he admits that it is difficult.  “My son is only 16 years old, he is very ill, he needs medical treatment but they don’t care.  My son is ill, I have a problem with my heart, my wife has a problem with her nerves, but I thank God that we are still alive.”