Choir bus hit by settlers on way back from Nablus

On our way there I remembered the first time the choir went to Nablus in 2007. Back then it was really difficult to enter Nablus as it was under Israeli military siege. We had to change buses and go through many checkpoints. It took us about three hours. This time is was much easier to get into Nablus. The way back was a different story. 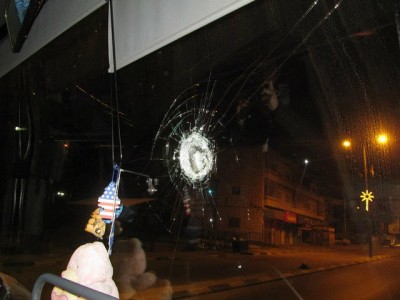 The road to  Nablus goes through many “shared” roads. These are roads inside the occupied West Bank that Israeli settlers use. The best and high land is occupied of course by settlers. Recently, the settlers have become increasingly violent, even attacking their own military – that military that is there to protect them. As we were passing by the illegal settlement of Ofra, we were attacked by a small group of settlers who were standing by the street. One big rock hit the front shield of the bus causing a big hole and cracks and miraculously the shield did not go down. I was in the front seat with Rudaina and we were hit by many small pieces of glass but thankfully we were not hurt – just terrorized! We were all shocked when it happened. We all thanked God for his protection and for the bravery of the driver who simply kept driving in very high speed. God protected us. But what if …

Settlers violence is becoming the norm. We became yesterday one more victim of the “price tag policy.” The question is for how long will it go unpunished? Had it been the oposite, I mean if Palestinian young people threw rocks at an Israeli bus and then hid in a Palestinian village, the Israeli military would have turned the village upside down until it finds the “terrorists”. 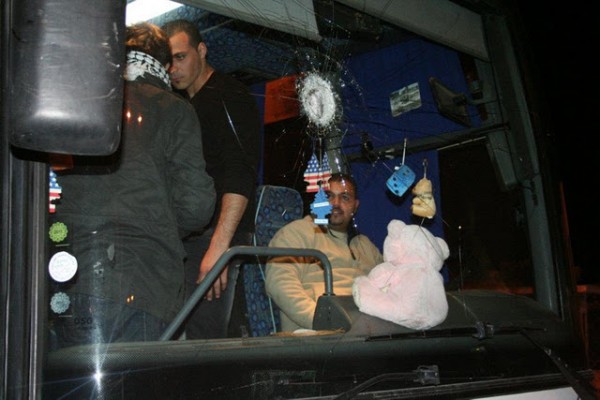 How long will settlers activities go unpunished? How many more mosques will be burnt? Cars hit? People killed? What if the driver yesterday lost control of the bus? What if the rock went through the bus? When will Israel treat these settlers equally as they treat Palestinians who do violence (or nonviolence)? Will Mr. Natanyahu – who just last week refused to call these settlers terrorists – taken action? 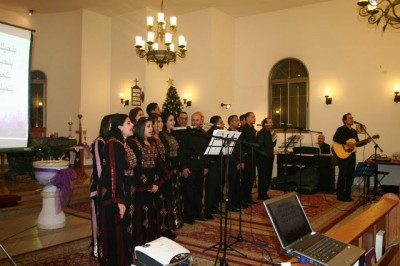