ISM has maintained a daily presence at the al-Kurd residence in Sheikh Jarrah since August 2009 when Israeli authorities paved the way for Israeli settlers to occupy the front part of the family home.  On the first night of Eid al-Adha, on November 6th, 2011, three international volunteers camped in a make shift area just outside of the residence, located in the same area where the ISM tent was before it was burned to the ground by the settlers just two months ago.

Thirteen al-Kurd family members spanning three generations gathered to celebrate the Muslim holiday.  In tradition, gifts were given to the children and the women of the family.  All enjoyed a dinner of lamb, salad, mansef (a local dish of bread, yogurt, and meat), and burma for dessert.  And as always in Palestine, plenty of tea and coffee was prepared and enjoyed.
After staying the night I had more time to talk with Nabil.  He showed me the blankets he’d been forced to hang to prevent water, vomit, and human waste being tossed at the family from the windows of the house occupied by illegal Zionist settlers.  They were hung between the areas where his children used to play and the greatly reduced patio space just outside his family’s entrance.  The metal gate that once separated the space was torn down by the settlers.  The swing and seasaw that his children once enjoyed were also dismantled by settlers and now lie unusable in the back of the house.

The violence directed toward the Al-Kurds does not stop with the constant verbal abuse and the tossing of liquids.  One female family member, for example, has been beaten on six occasions, each time requiring medical attention.  On this first night of Eid, the settlers ran power tools until 3 AM, and dogs barked loudly, making sleep difficult for the family.
Activists were doused with water several times throughout the evening as well.

Nabil’s wife and daughters left early Monday, the second day of Eid Al-Ahda.  Below are Nabil and his son Mahmoud just before leaving for more family festivities. 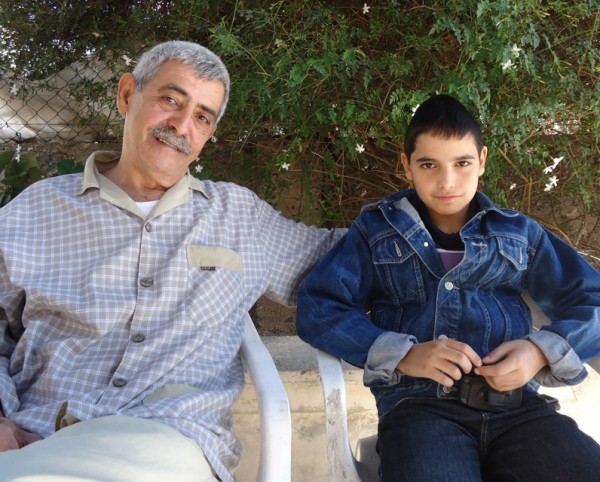 Wahed Rajol is a volunteer with International Solidarity Movement (name has been changed).