New
Home / In the Media / Refusing to die in silence: Palestinians resist settler violence during the olive harvest

Refusing to die in silence: Palestinians resist settler violence during the olive harvest

As this year’s olive harvest sends Palestinian families across all of historic Palestine out to their olive trees, a new nonviolent resistance group called Refusing to Die In Silence is patrolling the West Bank, protecting harvesters from increased settler violence. 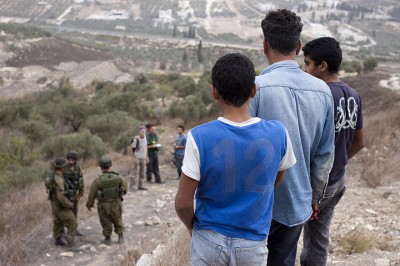 The 2011 olive harvest, which began in early October, has seen a troubling rise in settler attacks. On October 20, OXFAM reported that Israeli settlers have already cost West Bank Palestinian farmers $500,000 this year in destroyed olive trees. In September alone, 2,500 olive trees were destroyed, out of 7,500 destroyed so far this year (and a conservative estimate of 800,000 destroyed since Israel’s annexation of the West Bank in 1967). This is particularly damaging because this year’s olive harvest is expected to yield only half the oil of last year’s harvest, making each tree all the more valuable more farmers.

An interactive map released by the human rights organization Al-Haq illustrates the “alarming increase in violent attacks” throughout the West Bank in September. In response, Refusing to Die in Silence, launched on September 19 in anticipation of increased violence during the UN vote, has organized daily patrols in the regions between Ramallah and Nablus to protect farmers during the olive harvest. Incorporating Palestinian, Israeli and international activists, armed with cameras and guided by a commitment to nonviolent resistance, the group uses a coordinated system of car patrols, directed from a control room in Ramallah, to respond to settler attacks as they occur.

Says Haifam Katib, a coordinator of Refusing to Die In Silence who has been integral to the group since its inception, “we made the group because the settlers attack the villages in Palestine, especially during the month of the harvest. Last year there were many problems and so we decided to protect our people and to help our people pick olives, and to make what is going on well known…to help them, to push them to continue, to not be scared about settlers, to save their land- this is our plan.”

Like September, the month of October has been rife with settler attacks. On October 1, armed settlers uprooted dozens of olive trees in the village of Madama south of Nablus, and settlers from Yitzhar burnt many olive trees in the Einabous and Huwwara villages, south of Nablus. The same day, olive trees were also uprooted and set afire by settlers in the villages of Nabi Saleh and Dier Nidham, in the Ramallah district, and as the trees burned, Israeli soldiers prevented farmers from extinguishing the blaze and salvaging their sole sources of income.

Refusing to Die In Silence maintains contact with West Bank Palestinian villages close to Israeli settlements, so that, in case of a settler attack, help is only a phone call away. “We went around to all of the major villages, and we gave our phone number to the local committees and to the popular committees, and to the people close to the settlements who want to pick olives. They have our number, and if they have problems they call us. We go there quickly to see what happened, and all our guys are journalists, they are filming. It’s their job, and they know how to do it.”

On October 6, settlers uprooted 200 olive trees just after midnight in the village of Qusra, south of Nablus, hours before their owners were to reap their fruit. Katib explains, “in Qusra we arrived in the morning, and saw that settlers had come in the night and cut the trees. The land is very important to the Palestinians, and especially the olive trees grow very slowly, and they take care of the trees many years, to take olives after they grow. So it’s very hard [when settlers cut the trees].”

On October 9, dozens of settlers armed with sticks and stones attacked Palestinians from the village of Awarta, east of Nablus, as they attempted to harvest olives close to the boundary of the Itamar settlement. Two days later, on October 11, settlers from the settlement Elon Moreh attacked olive harvesters near the village of Azmoot, east of Nablus, in a fistfight which occurred after a verbal standoff. The same day, settlers set fire to olive trees in the Palestinian villages of Ras Karkar, Beitillu and Deir Ammar, villages west of Ramallah.

In the midst of this flurry of assaults, the Palestinian Authority released a statement on the 24th condemning Israeli inaction, expressing that “Israeli violations against Palestinians and their property and livelihood continue to increase with little or no action by the Israeli authorities to hold people to account under the rule of law.” The next day, the Israeli human rights NGO Yesh Din released a new data sheet accusing the IDF of a “general failure to enforce the law” in failing to protect Palestinian olive trees from settler violence, noting that of the 127 cases under Israeli investigation over the last six years, only one has led to an indictment.

The most serious attack so far this year occurred on October 21, when masked settlers from the settlement Esh Kodesh, armed with metal poles and firearms, descended upon villagers harvesting olives in Jaloud near Nablus, injuring four, including a 12-year-old boy and an Israeli activist. Katib explains that the presence of cameras in Jaloud helped de-escalate a situation that could have turned lethal. “In Jaloud, one international group went to help the farmers to pick olives. When the settlers saw the farmers coming to pick olives they came with guns. But since there was a group that came with cameras, the soldiers came and tried to speak to the settlers, and the soldiers were very nice this time. But be sure, when we do not have cameras, we do not have a good day with settlers.”

By fixing an international eye on the actions of the settlers, the presence of the camera can halt their aggression and de-fuse their violent intentions. “I feel the camera can stop the violence,” says Katib, “because the camera is always a witness in the place…I think the settlers know now that if they want to come and do this, they will be filmed.  Maybe they are starting to be scared by the camera, it is good. ” The camera can also force soldiers to actually adhere to their stated policy of protecting farmers from settler attacks. In the village of Jeet near Nablus, for example, Refusing to Die in Silence accompanied the farmers to their fields “because they were scared to pick olives. Some soldiers were protecting the area, we saw them but we did not care about it, and we started to pick olives. After half an hour the settlers came with covered faces, and they started to throw stones, they started to scare the farmers, and  the soldiers did nothing. But when the group of settlers saw the cameras, in this moment they were surprised, and the soldiers and the police, when they saw the cameras, came very quickly and kicked the settlers out. This was because of the cameras.”

Thom, a British activist working with Refusing to Die in Silence, concurs that the camera can effectively counter settler violence as it occurs. “The idea [of Refusing to Die in Silence] came from there being a lack of media as settler violence is taking place. There are numerous reports of settler violence, you can find alot of media covering violence after it happens and reporting about it, but there seemed to be little or no media trying to cover the violence as it was going on. So we came to try and fill that gap, and also not just to have an observer role but also to use the international solidarity here in Palestine to try to deter the violence.”

The presence of internationals in the organization is crucial. Says Katib, “always we have internationals and Israeli activists to be with us, and it is very important. Nobody can believe Palestinians. Nobody, except sometimes the media here. When the media comes from outside, from CNN and the like, they do not believe the news when we speak about settlers killing two or three or four, and it takes time. But when we have an Israeli activist and international activists speaking about this and showing and writing about this, nobody can tell them it is a lie. This is a very important thing. If they see this from their own yes, they are a witness in Palestine and they can speak to their own country about this.”

The presence of internationals on the scene, however, can not always save the day for Palestinian olive harvesters. In what has unfortunately become a yearly ritual for the conflict-ridden area, Palestinian harvesters in Hebron’s illegal settlement Tel Rumeida could not harvest their 3000-year old olive trees on October 22 without constant harassment from extremist settlers- who taunted them by standing on the Palestinian flag- and Israeli soldiers- who joined in the harassment and blocked the path of international activists, present at the scene to protest the occupation and stand in solidarity with the farmers.

‘James’, from Britain, was one of these international activists.  “We were there to support and show solidarity with the farmers,” he said, “because they are under siege, they are very beleaguered in that area. They are surrounded by four settlements, and they want  outside support. It’s really important to them, so that internationals know what’s happening there.”

Haifam Katib, and the other coordinators and participants of Refusing to Die In Silence, are optimistic about the project’s present and future role in developing a coordinated response network, across the West Bank, to challenge and counter settler aggression as it occurs. “In Hebron they have popular committees also doing the same thing. We have many people in Palestine, doing this everywhere, in Jerusalem, in Bil’in, in Al Masara. Also B’tselem is doing the same thing, giving out cameras and going around to document.

“It is the beginning,” he says, “and we hope to continue and to collect more people, and to have cars all around the West Bank, but its really hard. We have some students, some people have another job, so some people can come today but they cannot come tomorrow, and other people continue, its like this. Hopefully we will continue a long time, and we will grow stronger, and continue to make a difference.”

Ben Lorber is an activist with the International Solidarity Movement in Nablus. He is also a journalist with the Alternative Information Center in Bethlehem. He blogs at freepaly.wordpress.com.