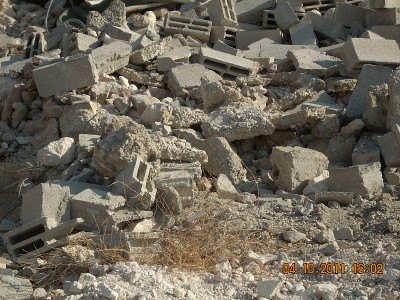 On Tuesday around 11am the Israeli army carried out demolitions in the West Bank towns of Beit Ula and Kufr ad-Dik, destroying homes, animal pens, wells and hundreds of trees.

Yousef Muhammed Turshan sat amongst the rubble that used to be the home for him, his wife, and 5 children.

“This is our only home, I don’t know where we will sleep tonight. They destroyed the building that held the sheep and now they have gone missing. This is my children’s future they are destroying.”

The Tursham family lost the tent they lived in as well as 2 brick rooms, an animal pen, and a water cistern. Their land was one of 3 sites demolished in Beit Ula. In total the Israeli army destroyed 1 residential tent, 4 brick rooms, 4 animal barracks , 4 wells, 2 irrigation systems, 150 olive trees and 400 other trees and vines. In Kufr ad-Dik, west of Saflit at least 2 animal barracks and a water well were also destroyed.

Another farmer from a site in Beit Ula showed the wasteland that had just a few hours ago, been full of hundreds of olive and fruit trees.

“I have cared for this land where they destroyed for years, checking every plant everyday. We pay 40 shekels per cubic metre of water from Israeli companies just to water them. I used to go out every night with a torch to check that the irrigation system was working correctly, now they are all destroyed and all our efforts were for nothing.”

After the bulldozers uprooted the 150 olive trees they also confiscated them from the land so that nothing could be salvaged. The farmers told us that they managed to save one home from demolition by sitting in front of it and refusing to move. However the house still has a demolition order on it, and they know that the army will return eventually to destroy it.

All of the farmers told us that they had documents proving that they owned the land, the sites destroyed were all at least 1 kilometre from the Israeli apartheid wall and there are no settlements in close proximity.

One of the farmers explained that the demolitions could not have been for security reasons because pine trees much closer to the wall were not destroyed. He believes they want to drive the farmers out from the land so that it can be claimed as state property after 3 years of not being used.

There are a further 11 demolition orders around Beit Ula, which means many families have to live with the fear that their homes, buildings or crops may be destroyed at any time.