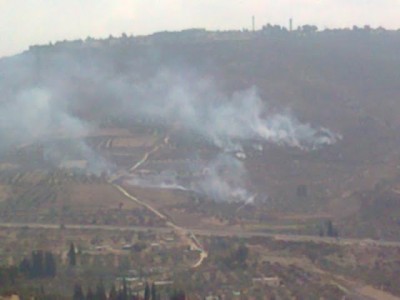 Settlers cause fires in Burin.

While villagers were celebrating a wedding in the small village of Burin, Israeli arsonists from the illegal settlement of Yitzhar seized the opportunity to set ablaze olive groves, destroying over 200 olive trees.

On September 5th at 5 AM, locals in the village of Burin and other surrounding areas awoke to the crashing sound of stones pelting their parked vehicles. The harassment continued, and at 3:15pm during a village party, settlers from the neighboring, illegal settlement of Yitzhar began to assault the village from the hilltops by rolling burning tires towards olive orchards.

Five tires were thrown at the groups of olive trees in a measured attempt to ensure maximum damage. When the Israeli army arrived the settlers began to stroll back towards the settlement, with soldiers closing off the road to prevent a fire truck from reaching the fire.

A number of villagers, who were at the wedding, left and started to make their way towards their olive groves, yet were stopped by Israeli military.

“The settlers were masked, and one settler had a video camera and was filming the event,” said Ghassan, a local of Burin.

This follows suit with the “price tag campaign” Yitzhar has famously coined, attacking Palestinians violently to wage a toll on their existence, while Israelis and Palestinians call on the Israeli military to stop condoning such attacks as the time for harvesting olives nears. International Solidarity Movement will be actively working during this time to safeguard Palestinians and assist in harvesting despite violent threats made by settlers throughout the West Bank.