Settler arson attack on the village of Madama

On Monday 30 May at 4pm, the villagers of Madama reported that a fire had been started by seven to eight settlers in one of the village’s wheat fields. The field was close to the place where less than a week ago, Hamad Jaber Qut – a 66 year old shepherd, was attacked by 15 settler youths with knives and sticks whilst tending his sheep and getting ready for prayer.

Mohammed, a resident of Madama, witnessed the arson attack which came at the hands of settlers who reside in the illegal settlement, Yizhar which is 1.5km away on top of one of the hills overlooking the Palestinian village. Mohammed saw them throw petrol and light the wheat. On seeing the smoke, the residents of Madama called the fire brigade to put the fire out, by which time the settlers had retreated back into the settlement. The fire was put out in due course.

When the ISM went to see where the attack had taken place, a jeep of Israeli soldiers could be seen watching the area.

This arson attack follows a violent physical attack on Hamad Jaber Qut who has sustained serious injuries to his face including two black eyes, gashes to his head, and bruising to his abdomen and legs after being attacked by 15 settler youths. When asked by the ISM whether he would go back to the land, he replied; “This land is our land, the settlement is in an area they should not be. The settlers did not take into consideration that I was preparing to pray before I was attacked. They are animals. This will not make us feel afraid, we have the right and god will be with us. All the world should know that their [the settlers] existence is illegal.” When asked whether he will go back to the land to tend his sheep, he replied; “Yes, I will go back. They will not stop us going.”

Madama is a village with 2,000 inhabitants located in the south of Nablus, in the West Bank. According to its mayor, Lehab Tahsin Qut, since the construction of the illegal settlement of Yitzhar in 1985, 1,000 dunams of land has already been confiscated from the village. 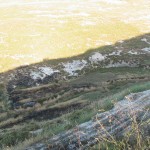 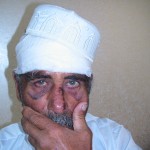