New
Home / Reports / Armed settlers harass the villagers of Qusra, a village south east of Nablus in the West Bank

Armed settlers harass the villagers of Qusra, a village south east of Nablus in the West Bank

On Saturday June 11, six or seven armed settlers accompanied by the Israeli military entered the Palestinian village of Qusra and harassed villagers. Before they escaped they threw stones at a village truck smashing the side glass and cracking the windscreen.

At approximately 5.00pm, the Imam of the mosque in Qusra started calling to the population of the village that there were armed settlers (from a new illegal outpost near the village) approaching the village, from one of the surrounding mountains. In a show of strength and solidarity, around 100 villagers went to the mountain with the purpose of defending their land. The army accompanied the settlers and threw several sound bombs to disperse the Palestinians. One of the bombs fell inbetween 19 year old Ismail Aburedi’s legs. It rendered him unconscious and later, deaf and unable to walk. The Israeli army refused to let Ismail be taken to the hospital but it is reported that his friends placed him in the back of a car and raced him to Rafidia Hospital in Nablus where he was kept until 2 am the next day. When interviewed by ISM, Ismail Aburedi said: “We will remain in this land, we have been here for hundreds of years and we will be here forever. These settlers are new, we will stay and I will defend my land. There is no where else for us to go.” 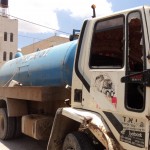 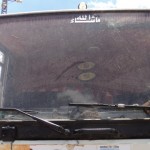 The army also tried to arrest 21 year old Burham Hassan, but the villagers dearrested him and managed to “get him back.” Before escaping, the settlers smashed the front and the windscreen of a truck owned by Hosni Aburedi.

Qusra is a village with approximately 5000 people located in the northern of the West Bank, about 30 minutes away from Nablus. The village has already lost around 300 dunams of their land to the surrounding illegal settlements in the area.