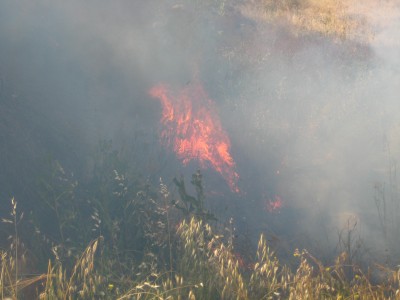 Israeli settlers suspected of starting a fire on Palestinian land near Hebron.

On Thursday May 19 a part of the field of Abd al Kareim al Jabari in Western Hebron, where International Solidarity Movement activists have been present for the past ten days, was set on fire.

Settler children started to throw stones at the ISM activists as soon as they arrived at the farm on Thursday. At 3:40 PM, when the activists were helping the farmer on the land, smoke appeared from another part of the field which is just below a kindergarten in the illegal settlement of Givat Ha’avot. After approximately ten minutes the fire brigade of Kiryat Arba came and started to extinguish the fire, while children from the settlement sang songs and chanted “Death to the Arabs”.

The Israeli military, boarder police and police arrived and straight away requested proof of identity from the ISM activists, a B’tselem activist and one of the daughters of the family. Abd al Kareim al Jabari was told that a man from the illegal settlement claimed that he had seen the ISM activists setting fire to the field! This accuse was apparently confirmed by a settler guard from Kiryat Arba. After checking the identity of the activists and keeping their passports and ID cards for half-an-hour, the military and police drove away. 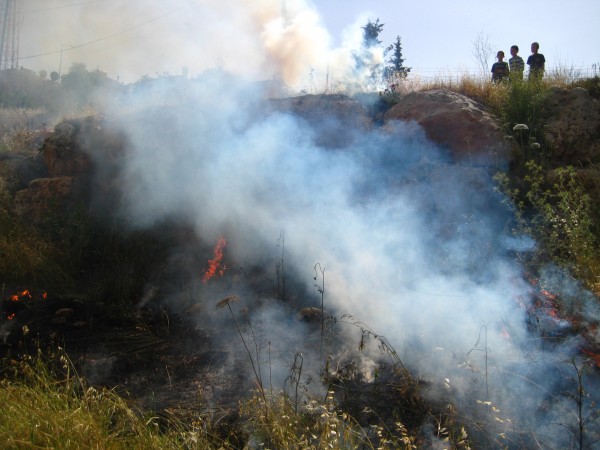 As ISM has reported earlier, the Jabari land is very exposed to settler violence as it lies between the illegal settlements of Kiryat Arba and Givat Ha’avot in Western Hebron.