Approximately one thousand people demonstrated in Hebron during the weekend to commemorate the Nakba day. Several protesters were injured after violent responses from the Israeli army.

On Sunday the 15th May around a thousand Palestinians joined in a demonstration to commemorate the Nakba, (in English literally “the catastrophe”) which occurred in 1948 when hundreds of thousands of Palestinians were expelled from their homes as the Israeli state was created. The demonstration, in which the International Solidarity Movement as well as all major political parties and the Mayor of Hebron took part, started at the Hebron Municipality building in the H1 area (the area of the city controlled by the Palestinian authority) and stopped at the UNRWA (The UN Agency for Palestine Refugees) office, where speeches were held. The chants of the demonstrators and the speeches highlighted the right of the 1948 refugees to return and the unity of the Palestinian people. 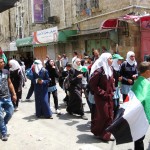 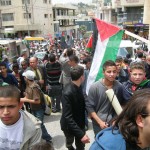 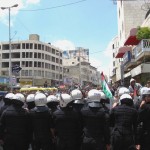 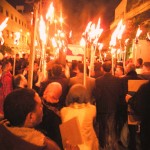 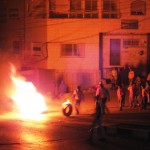 On Saturday the 14th of May during the evening a march took place involving around 300 Palestinians, they carried fire torches and marched from the Municipality to the nearby square where speeches were made. They also carried keys which represent the loss of their homes in the Nakba. The march took place within the Palestinian controlled part of Hebron and there were no difficulties with the Israeli military although a sizable Palestinian police force was on call to watch the protest.

On Sunday the 15th during the evening after the main protests marking the Nakba, the ISM were asked to attend a protest by Youth Against Settlements, a Palestinian activist group. The demonstration was held in Wadi al Hadya. Though all of the street lights had been inexplicably turned off, the ISM members reported 30 youths gathered at the base of the hill and were blocking the road with a large skip, which was set on fire. This was to stop the advance of Israeli soldiers who had gathered at the top of the hill. The soldiers were using their laser sights which could be clearly seen moving over the young men gathered at the protest. The soldiers then fired tear gas and sound bombs in order to disperse the gathered youths. As far as the ISM members were able to tell nobody was injured by this unprovoked fire but this is as yet unconfirmed.