On Thursday May 26, Hamad Jaber Qut, a 66 year old shepherd from the village of Madama, was taken to hospital after being attacked by settlers with sticks and knives.

At about 16:30 whilst Hamad was herding sheep in the mountains of Madama, situated near the illegal settlement of Yitzhar, approximately 15 settlers approached him. Due to his sight problems Hamad wasn’t initially able to recognize that the men were settlers. In an unprovoked attack the settlers beat him with thick wooden sticks and knives for about five or ten minutes, until one resident of the village saw what was happening and called for help. Hamad, who was badly injured was taken to Rafidia hospital in Nablus, where he is still feeling very weak. He has approximately 25 injuries all over his body, especially his head and hands, and will stay in the hospital until he recovers.

Madama is a village with 2,000 inhabitants located in the south of Nablus, in the West Bank. According to its mayor, Ihab Tahsin Qut, since the construction of the illegal settlement of Yitzhar in 1985, many villagers have been attacked by the settlers and 1,000 dunams of land have already been confiscated from the village. Settler attacks on the farmers have severly effected the village’s agricultural trade in the past years. 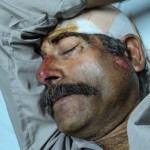 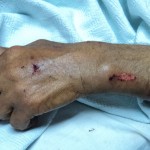 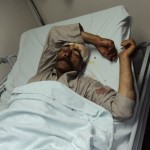