Israeli forces arrested 15 demonstrators, including Abbas Zaki of the PLO Executive Committee, during a Bethlehem demonstration to mark Palm Sunday and protest Israeli restrictions on movement. An AP photographer and four members of local popular committees were also arrested.

About 200 demonstrators set out from the Church of Nativity today on their way to Jerusalem to mark Palm Sunday, protest Israeli-imposed restrictions on movement and demand that Israel respects Palestinians’ freedom of religion. The protesters, who overwhelmed the soldiers at the checkpoint in their numbers, managed to nonviolently pass through the Bethlehem checkpoint and enter Jerusalem. They were blocked by a massive police force shortly after and could not advance further.

Once blocked, the demonstrators, who all remained peaceful throughout the protest, held speeches, and then began heading back. It was at this point that the police staged its unprovoked attack on the retreating protesters. Among the 15 arrested were four Israelis, one international activist, PLO Executive Committee member Abbas Zaki and AP photographer Fadi Hamad, as well as four members of local Popular Committees.

The march, which began after the Palm Sunday service at the Church of Nativity in Bethlehem, was held to protest a recent aggravation of Israeli restrictions on movement through the checkpoint. Protesters aimed to highlight restrictions on access to Jerusalem on the day marking Jesus’ entrance to Jerusalem in Christian tradition. 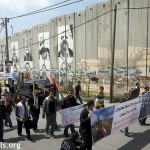 Around 200 Palestinians, Israelis and internationals walk from the Nativity Square in the direction of Jerusalem through Gilo checkpoint 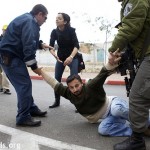 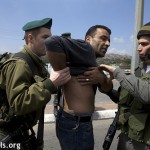