Over 1,000 Palestinian citizens of Israel and several dozen Jewish Israelis demonstrated this morning outside of the Erez Crossing, demanding an end to the Israeli blockade of the Gaza Strip. Organised by the Arab High Monitoring Committee, the demonstration coincided with the one year anniversary of Israel’s military attacks on the Gaza Strip, which resulted in 1,400 deaths and thousands wounded. 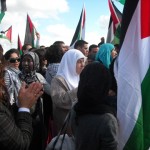 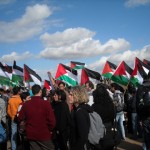 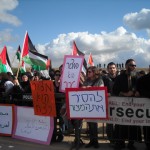 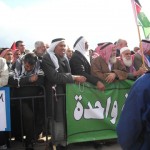 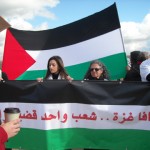 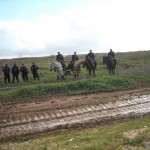 “”The Israeli war against the Palestinians of Gaza continues one year later,” said Knesset Member Jamal Zahalka (Balad) at the protest. “We demand an immediate end to the Israeli siege, and that the Israeli criminal leaders who implement this dirty war be brought before international tribunals before they start another war,” he added.

A demonstration on the Gaza side of the border was conducted simultaneously, joined by over 80 delegates from Gaza Freedom March.

The protest on the Israeli side was attended by grassroots Palestinian activists from throughout Israel, with particularly large delegations from the Naqab (Negev), Jaffa and the Galilee area. A busload of activists from the Sheikh Jarrah neighborhood of Jerusalem, which has suffered from Israeli ethnic cleansing activity attended the demonstration, in addition to three buses of international and Israeli activists from Jerusalem organized by the Alternative Information Center (AIC), also attended the demonstration.

“It was important for us to encourage and assist international and especially Israeli activists to support this initiative of the Arab High Monitoring Committee,” noted Michael Warschawski of the AIC. “While a mass mobilization against the Israeli siege on Gaza is planned for this coming Saturday night in Tel Aviv, it is important that Israelis stood in solidarity and partnership alongside Palestinians here beside the Gaza Strip.”