New
Home / In the Media / 28 kilometers of distilled apartheid

Palestinian, Israeli and foreign protesters run from tear gas fired by Israeli troops during a demonstration on Highway 443 in 2008. (AP)

This highway has told the whole story. They pave a road, expropriate Palestinian land and the High Court of Justice approves the expropriation, in its words, “provided that it is done for the sake of the local population.”

Afterwards they prevent the “local population” from using the road, and finally they build a wall with drawings of creeks and meadows so we don’t see and don’t know that we are driving on an apartheid road, that we are traveling on the axis of evil.

Apartheid? What are you talking about? It’s just a freeway to the capital, because that’s how we like it best. Going (quickly) along with the occupation and feeling like there is none. That way the highway has fulfilled another secret national wish – that they get out of our faces.

How many of the masses of travelers on this high road to the capital have looked to their left and right? How many of them have noticed the 12 roads blocked by iron roadblocks and piles of garbage? (Is there another country that blocks roads with garbage?) And what about the 22 confined and concealed villages alongside the road? How many people have asked themselves how it is possible that a road that was paved in the heart of the Land of Palestine has no Palestinians traveling on it? How many have noticed the sign that leads to the “Ofer [army] camp”, another whitewashed name for a detention facility or the hundreds of prisoners detained there, some without trial?

How many have observed the inhabitants trudging over the rocky ground to get to the neighboring village? It’s 28 kilometers of distilled apartheid: the Jews on top on the freeway becoming of the lords of the land. Palestinians down below, going on foot to the Al-Tira village girls’ school, for example, through a dark, moldy tunnel.

I, too, have deliberated more than once whether to take Highway 1 with all of its traffic jams or 443 with all of its injustices. In my transgressions, sometimes I have opted for the injustices. It’s like shooting and crying. First you kill and then you are struck with grief over what you have done. I have driven and cried.

The High Court of Justice has again proven how essential it is. Too late and too little, and strangely imposing a delay of five months in the implementation of its ruling. It is not a beacon of justice with regard to everything related to the occupation, but it is at least a small flashlight shining a faint beam: beware, apartheid.

Justices Dorit Beinisch and Uzi Vogelman should be commended. They have reminded us what had been forgotten. There are judges in Jerusalem, and periodically they even come out against the injustice of the occupation. See you in another five months. By then maybe the state will find a range of rationales and excuses not to enforce the ruling. Palestinian cars on Highway 443? You’re making me (and the army) laugh. 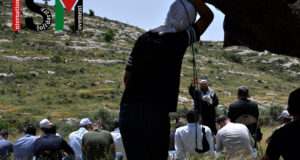