Ni’lin demonstrates against the Apartheid Wall

More than 200 demonstrators attended the weekly demonstration against the Apartheid Wall in Ni’lin today. This week the demonstration was calling for Palestinian unity and the protestors demanded a stop to all factional rivalry and unite against the occupation. ‘The Palestinian people are one, the Palestinian people all live under occupation and we can only over come if we stand strong as one!’. This week there was a large number of international solidarity activists, who are currently in Palestine for olive harvest. There was a delegation from the Norwegian foundation BLETZ and around 20 to 30 other internationals from different countries, all carrying signs advocating for the Palestinian and calling to end the occupation.

The demonstrators carried a coffin that had statements written on it calling for unity, such as: ‘Palestinian brothers, Unite!’, ‘Stop the bloodshed amongst us’. A number of protestors had put stickers on their body with the same statements. All political parties active in Ni’lin were carrying their flags in the demonstration in order to show the unity amongst them. One participant stated: “In Ni’lin, we have been resisting the Apartheid Wall, the land theft and the aggressive Israeli occupation as one for 1,5 year now, we must all follow this path of popular resistance through unity in order to resist the occupation effectively. We are all brothers and we must support each other, otherwise our cause is lost.”

Once the demonstration reached the Wall, they were met with large quantities of tear gas and rounds of rubber coated steel bullets. Israeli soldiers wounded six people. One Norwegian solidarity activist was shot in his arm and received treatment on the spot. A resident of Ni’lin (20 years old) was seriously injured when he was shot in his jaw with a rubber coated steel bullet. He was taken to Ramallah hospital immediately for treatment.

The protesters tried to pull the concrete wall again, they pulled a small part of it, they want to send a message for the government of occupation that the wall will fall soon and the start will be from the village of Ni’lin, small kids also sent their message buy hitting the jeeps with a stones while they are hiding by the concrete, they said we are with our brothers and sisters against the occupation and against taken our lands.

The occupation forces opened the gates in the apartheid wall twice and more than 30 soldiers followed the protesters close to the village, the youth respond by throwing tear gas canisters and stones the invaded forces, one of the soldiers shoot live bullets, two of the youth lucky the bullets passed close to them, but despite the heavy use of bullets the youth pushed them back to the wall, the demo end after 6 hours. 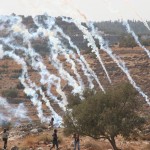 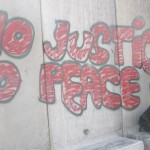 Protestors spray paint on the Wall 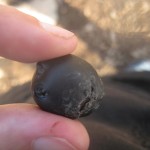