Around 150 protesters gathered in Ni’lin to protest against the Apartheid Wall. A month ago, the concrete Wall was put up in Ni’lin and this Friday was the first time the demonstrators managed to displace a part of it.

The Friday prayer during Ramadan took place in the olive groves of Ni’lin. The residents of Ni’lin were joined by international and Israeli solidarity activist in the demonstration against the Wall Israeli authorities have built on the village land. The protesters walked carrying Palestinian flags and chanting against the Occupation. Tires were lit on fire and places next to the illegal Wall, whilst a Palestinian flag was placed on top of the Wall.

The Israeli armed forces used a severe amount of tear gas against the protesters and many of them had to receive help from the medical team due to respiratory problems. On several occasions, the soldiers aimed directly at the demonstrations and one international activist and two Palestinians were hit by the tear gas canisters. The army also brought a tanker truck spraying people with stinky chemical water. Some local boys responded to the military violence by throwing stones.

Another group of demonstrators tried to tear down a part of the Wall. With a small pulley system, that was tied to an olive tree. A strong action showing that the Wall can be moved and hopefully one day will not be on the land of Ni’lin or anywhere in Palestine.

Around 3.30pm the Israeli army entered through the Wall, shooting tear gas and chasing some of the protesters back towards the village. The demonstration concluded at 4pm. 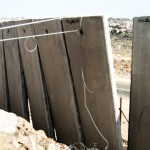 The concrete Wall, deemed illegal by international law, being pulled down in Ni’lin 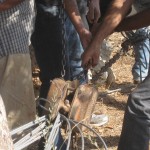 Protesters use a pulley system to move the Wall 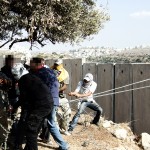 Demonstrators pull down the Wall