The funeral for Yousef Tzadik ‘Akil’ Srour was held in Ni’lin on Saturday, 6 June 2009. Srour was murdered by Israeli forces on Friday, 5 June 2009, during a demonstration against the construction of the Apartheid Wall on Ni’lin’s land. Akil frequently participated in the unarmed demonstrations against the construction of the Apartheid Wall. He was known as a leader amongst the demonstrators, always ready to help another. According to an eyewitness from the village, “The soldier was to our right and Akal was running to the left to help an injured man… when he was shot in the heart.”

Residents of Ni’lin, amongst others, drove behind the vehicle bringing Srour’s body back to Ni’lin. The procession reached Ni’lin from Ramallah around 12:30pm. People marched through the village, carrying Srour’s body to his home, the mosque and finally to the place of burial. Sour’s brother and other Ni’lin residents spoke of Akil’s kindness and dedication to his village after his burial. 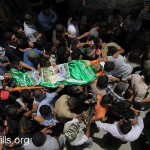 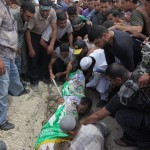 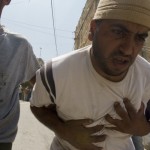 Akil, choking on tear-gas at a demonstration in Ni’lin

Additionally, a tunnel for Palestinians is being built underneath road 446. This tunnel will allow for the closure of the road to Palestinian vehicles, turning road 446 into an Israeli-only road. Ni’lin will be effectively split into 2 parts (upper Ni’lin and lower Ni’lin), as road 446 runs between the village. The tunnel is designed to give Israeli occupation forces control of movement over Ni’lin residents, as it can be blocked with a single military vehicle.