We were back at Faraheen this morning accompanying farmers again, eying the jeeps driving along the Israeli border while our farmers removed the irrigation pipes from one of the fields we have visited regularly. Since Mohammed was shot in the leg, the farmer here has decided to give up on this field, its convenient well, and its half-grown parsley crop – 200,000 shekels worth – in case of further injury or death of harvesters. It was a quiet morning, thank goodness. 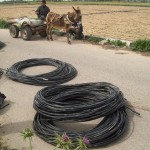 Giving up on irrigating parsley too dangerous to pick Art from children at the Al Amal Centre, Khan Younis

Tristan is conscious and was breathing on his own until he caught pneumonia. He has a long way to go and it’s not known what will be ahead – for sure, more surgery, including on his damaged right eye.

A second time this week we spotted an Israeli gun boat traveling at 3 miles from the shoreline, all the way from near Deir al Balah to Gaza city (it kept pace with our shared taxi) as fishermen were out trying to get in a catch in, and inevitably the next day we heard that a fisherman had been shot; Deeb Al Ankaa who we understand to now be in Kamal Odwan hospital.

I met a great Manchester guy this week, Dr Sohail of Medical International Surgical Team (MIST) who has come here to do good work with peoples’ bones, for example working with amputees who have had limbs removed at a high point, to enable the otherwise impossible attachment of prosthetic limbs (if Israel lets the prosthetics through the border, which apparently is another problem of the siege…).

Thinking about bones, I immediately thought of Wafa. After wincing at the picture of her in hospital the day after soldiers shot out her kneecap, Dr Sohail said “I’m a kneecap man!” and told me a series of incomprehensible surgical things he might be able to do to give her back some movement. We rang her family today while standing in the Faraheen field (it’s a good time to get your phone-calling done) to say that Dr Sohail will see her in June if I go and take a photo of her medical records for him beforehand.

Dr Sohail spoke of the several limitations medical people are under here – mostly no access to the latest equipment – if any gets in, no access to training on how to use it – and of course very little of the ongoing training amongst their international peers that people doing tricky surgical things need to have.

In the last days there have been renewed calls for an International Criminal Court investigation into war crimes in Gaza, including for example “white flag killings” by Israeli soldiers. One of the big problems in the way is that during the attacks there were no forensic pathologists in Gaza trained to a level that would meet the requirements. (They are trying to send some people outside for training now, ready for the next time…) A second big problem is that when the International Criminal Court representatives tried to get in through Rafah to investigate the situation, Egypt refused to let them through, so they missed the February 8 deadline for submitting evidence.

And it was never going to be easy. Here is an example. One of the Al Quds Red Crescent medics talked about getting through to some of the surviving Samouni kids trapped with dead adults, on the first Red Cross/Red Crescent evacuation permitted by Israel. He said the kids (who they found in circumstances that left some of the medics who reached them, traumatised themselves) said the adults had been shot, and they had covered over the bodies themselves.

The medics knew it was important to try to take the adults’ bodies out, but the children were starving, dehydrated, and in a state of collapse. Since Israel had not permitted the medics to take ambulances, and several miles had to be covered, the medics found a donkey cart for the children. The Red Cross asked Israel to be allowed to take a donkey to pull the cart, but Israel said no.

My medic friend says: “We put the children on the donkey cart and pulled it ourselves, hurrying to get out before 4pm which was the deadline for the evacuation. And there was no room for the bodies. So a lot of time passed before those bodies could be retrieved, and while we have the verbal testimony of the children, we don’t have an early medical assessment of the adults bodies.”

I was called in to PressTV to give an interview today about what I witnessed myself, and it turned out this is because Israeli soldiers have themselves started to admit some of what went on, in the Israeli press today. This has been covered by the TimesOnline, and the International Middle East Media Centre. It includes an anonymous solider who ’says that he was told “we should kill everyone there (Gaza). Everyone there is a terrorist.”‘