Residents of Ni’lin, along with international and Israeli solidarity activists, gathered to demonstrate against the construction of the Apartheid Wall on Friday, 27 March 2009. Shortly after protesters began marching on the main road in town, they were attacked with tear gas by Israeli forces. The army maintained a presence in the village, occupying several Palestinian homes and shooting gas and 0.22 live calibre bullets at demonstrators. One demonstrator was shot with live ammunition in his leg, another was hit by a tear gas canister and many suffered from tear gas inhalation. 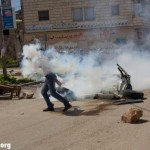 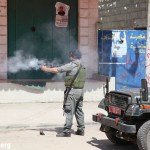 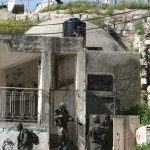 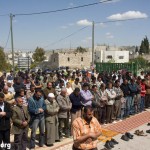 Ni’lin residents praying on their land 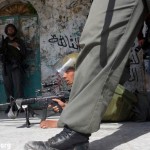 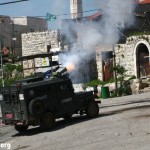 After a prayer near the village clinic, around 250 protesters marched along the main road, chanting their opposition to the Israeli occupation. Israeli forces fired upon demonstrators before they were able to head to their olive fields. A barrage of tear gas was shot into the village, dispersing the united march.

After the initial attack, military jeeps entered the village, occupying homes to shoot at demonstrators. Several jeeps drove through the streets, periodically stopping to shoot at residents. Israeli forces positioned on the roofs of Palestinian homes also shot into the streets. The military incursion on Ni’lin lasted until 4pm and caused the injury of one demonstrator hit by a tear gas canister and another shot with live ammunition in the leg.

Responding to the Occupation, the theft of their lands and increased suppression of the village’s resistance, several demonstrators threw stones at the armed Israeli forces.

The struggle has intensified as Israeli forces have begun conducting military incursions in the village at the start of the weekly Friday demonstration for the past month. Protesters are being denied not only access to their olive fields, but their freedom of expression against the Occupation within the town. Despite public criticisms in response to the recent, critical injury of Tristan Anderson, the army continues the dangerous tactic of shooting tear-gas canister at demonstrators, utilizing the canisters as weapons rather than the gas as crowd dispersal.

Israeli occupation forces have already murdered four Ni’lin residents during demonstrations against the confiscation of their land and critically injured one international solidarity activist.

Since May 2008, residents of Ni’lin village have been demonstrating against construction of the Apartheid Wall. Despite being deemed illegal by the International Court of Justice in 2004, the occupation continues to build a Wall, further annexing Palestinian land.