Threats and harrasment in Azzoun continue; Israeli army commander posts notice that he will “shoot to kill” rock-throwing youths

Lat night the Israeli army commander in the West Bank town of Azzoun posted photocopies of hand written death threats to town residents in various locations around Azzoun, as witnessed by a South Korean Human Rights Worker (HRW). In the note, the commander, identifying himself as Captain Joe, threatens to use live fire to kill the children who throw stones at the Israeli armored jeeps and Armored Personnel Carriers when they invade the village. 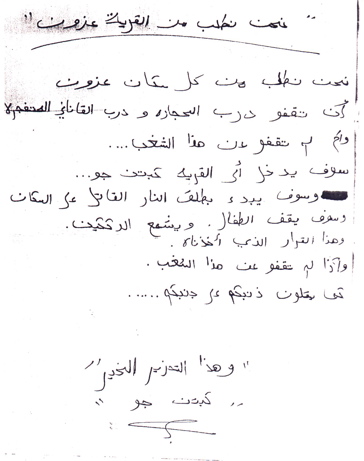 Abdullah Judi, an Azzoun resident, states “they come in most days, often positioning their jeeps near schools to provoke the stone throwers. They fire a lot of rubber bullets, tear gas, sound bombs and live ammunition. Sometimes they arrest some children, sometimes not.”

Below is a literal translation of the note into English:

Orders for the Azzoun Village

We order for all the people in Azzoun to stop throwing stones and molotovs and if you don’t stop this thing we will invade the village.

Captain Joe is coming to the village

“this is the last warning”

A fax copy of the orders, or the original orders themselves are also available upon request.

The author of the note ‘Captain Joe’ has verbally boasted many times over the last month to Palestinians and International Human Rights Workers of his willingness to kill, and how he has just come back from Gaza.

Recently, on Wed 16th January, he repeated these claims to a Canadian and an Australian HRW. Felicity Ryder, from Melbourne Australia, quotes Captain Joe as saying “‘I swear to God, don’t fuck with me. Tell these ‘poor’ people that the next time a kid throws stones at the road, the next time we enter this village, it will end in killing. Believe me.’

He then went on to ‘take credit’ for wounding Mohammed Faisel Sleem and Othman Mohamed Radwan on January 4th. The details of those shootings, along with a video, is available here:

Watch for the shots at 3 minutes 10 seconds and 3 min 25 seconds. The other youth, Othman Mohamed Radwan, was also lying defenseless on the ground when he was shot in the leg when on the same day. Medical reports are available verifying the two boys were shot with live fire.

On Thursday 17th January Captain Joe repeated his threats to residents of nearby Izbat At Tabib. Musa Assad Hamed Tabib, a local resident, told HRWs that “they (the army) came in at about 1am, making approximately 70% of the villagers come outside. The leader called himself Captain Joe and was pointing his gun at the boys heads as he told them he would kill them if they threw stones”