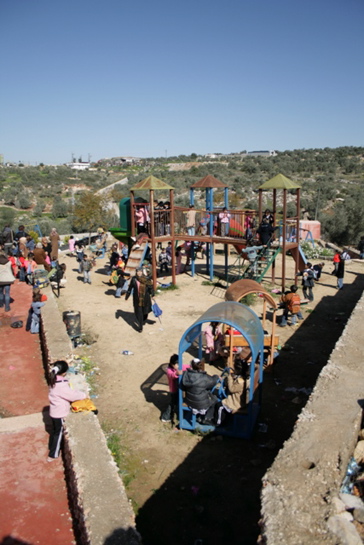 At 10am, February 21st, a demonstration took place at the children’s park of Azzoun. Approximately 50 children came together with their teachers, other Palestinians, internationals and Israelis to play and have fun together in what is now left of the park. About three weeks from now, on March 15th, the park is due to be demolished.

What was a day full of playing in the sun for the children from the kindergartens of Azzoun, was also a protest against the upcoming demolition. Local leaders, Israelis and international activists gave speeches as a mass of demonstrators waved flags and held up signs protesting the demolition order.

After the demonstration the gathered people marched together down to what used to be the main gate of the village, but for two weeks now has been closed by the army. There the peaceful and non-violent demonstration continued at the top of the roadblock, where it was approached by both army and police vehicles. No problems occurred and the demonstration was allowed to continue for about half an hour uninterrupted. 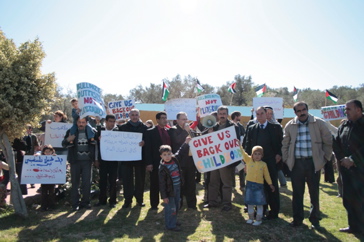 The children of Azzoun are indeed suffering from the Israeli occupation and for them the park is a fragment of joy in very dire circumstances. Regular army incursion into the town expose them to violence from a young age. Poverty is common in Azzoun as the closure regime has devastated the local economy. The Israeli army regularly declare curfew in the town, most recently just a few days ago.

The parks construction was near completion when on the morning of February 22nd, 2006, bulldozers accompanied by Israeli soldiers arrived and demolished half of the park – which consisted of two swimming pools and changing rooms.

The justification given by the Israeli army for the demolition was that the park lacked a building permit for that specific ground, an area which falls within Area C, thus under Israeli civil and military control. Building permits for Area C are notoriously unattainable, applicants being denied by the Israeli authorities-run Civil Administration, even when building on private land. In a recent Peace Now report, it was shown that 94% of housing permits have been denied over the last seven years. (1) The Israeli army had, prior to the demolition, given orders to stop the building several times, but despite that, the village decided to continue, strengthened by the knowledge that the building was taking place on Palestinian land.

An Israeli lawyer is working together with Azzoun municipality on the case, and has succeeded in getting the demolition postponed until March 15th, 2008. She is now planning to take the case to the Supreme Court, in the hopes of overturning the Israeli army imposition of an illogical and inaccessible building permit, a legal barrier which in this case is serving as a barrier to children’s recreation.