Tear gas and roadblocks are becoming routine in Azzoun

Azzoun village was again subject to curfew on Sunday, December 2. The Israeli army invaded the village at 3pm, with approximately 8 vehicles, including a large armored personnel carrier, a hummer, and several jeeps.

For the next three hours, the army vehicles circled the village, unleashing a multitude of sound bombs and firing rubber bullets at youths. In direct contradiction of Israeli and international law, tear gas was fired extensively in the village streets and also into people’s homes. One 79 year old man was overwhelmed by tear gas as he was working in his garden, the canister landing just 2 metres away from him. This is the second time in 10 days soldiers have fired tear gas inside the walls of his property, the first choking him in his sleep.

This makes the 14th major invasion in 33 days, and marks the 4th time in the same period that Israeli soldiers have used tear gas in civilian areas, including at school gates, in house courtyards, and in the streets between houses.

Two weeks ago, an Israeli army commander assured that Azzoun would no longer be subject to curfews. Yet despite these assurances, curfews have continued to be imposed –forcing residents to close their businesses and remain in their homes under threat of “punishment”. This punishment has repeatedly included arrest, beatings, shootings, and destruction of property.

While Azzoun has suffered from numerous such invasions and curfews, these actions are not isolated to this village alone. Indeed, many villages within the Qalqilya district, such as Al Funduq, Kafr Laqif, Jinsafut, Haja, Baqa Al Hatab, Immatin and Kafr Qaddum, have also been subject to ongoing curfews, invasions, and harassment. Road closures, another example of collective punishment (illegal under international law), have become ubiquitous in the region, with major checkpoints such as Qalqilya also being closed, thereby severely restricting freedom of movement. This, as such, regularly prevents access to work, medical services, and education among other things.

Earlier in the day, a military bulldozer imposed a fourth roadblock on Azzoun, blocking access to an agricultural road which had become an alternate route out of the village after the main entrance had been blocked by the Israeli army. These closures affect not only the residents of Azzoun, but also those from surrounding villages who travel through Azzoun to reach Qalqilya and Nablus. 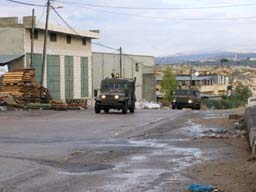