New
Home / In the Media / Apartheid Masked: Third in a Series of Non Violent Protests Against Apartheid Road 443

Apartheid Masked: Third in a Series of Non Violent Protests Against Apartheid Road 443

Yesterday saw the third in a series of non-violent protest against the Israeli system of Apartheid in the West Bank. 100 Palestinian, Israeli and internationals marched down to the side of Route 443 to convey the message of how Israel is denying Palestinians their rights to free movement within their own territory. They carried green Palestinian license plates with crosses made of Israeli and American flags over them to highlight how the Israeli system of apartheid has full American economic and political support.

The Israeli army attempted to stop the procession with force but the demonstrators managed to reach the side of the road and protest for about an hour, conveying their message to passing drivers. The army detained one Palestinian and one international, before releasing them towards the end of the demonstartion. 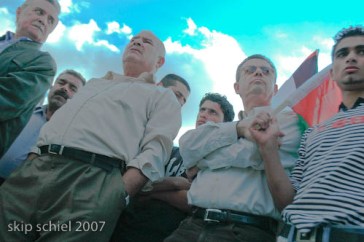 The system of roads inside the West Bank that are inaccesible to Palestinains cretaes isolated enclaves, severly hamperin the Palestinian economy, and affecting almost every aspect of Palestinian life. 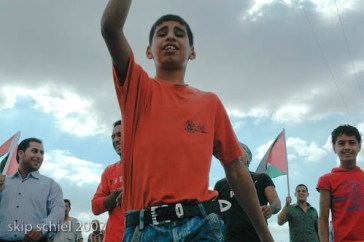 Most apartheid Roads are for settlers and arny use, Israelis insdie Israel proper are sheltered from seeing the affects their governments actions have on Palestinian peoples lives. However, despite 9.5 km of road 443 passing through the West Bank, it is the main route between Tel Aviv and Jerusalem. For seven years Palestinians have been banned from using the road, even though it is the only main road in the southern district of Ramallah, and its expansion was built on seized Palestinian land. The Road, together with the apartheid wall, create the enclaves of Bir Naballa and Biddu. The villages arecompletely surrounded by Israeli infrastruture and their inhabitants can only leave through underground tunnels to Ramalla. 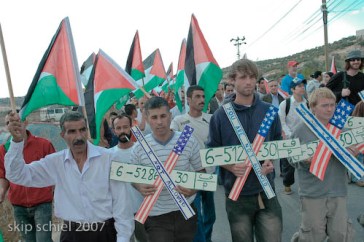