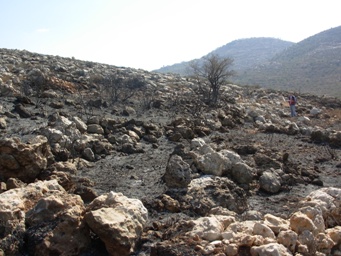 The West Bank village of Jamma’in has 10 000 residents, most of them farmers, and is close to the biggest illegal settlement in the west bank, Ariel, and another smaller one, Tapua. Often the villagers are harassed by settlers, most recently a few days ago when an old man was mugged whilst harvesting his olive field. Two weeks ago settlers also burnt down 50-60 olive trees and refused the fire brigade access to the site of the fire, ensuring the entire field was burnt. The army and settlers also regularly prevent farmers planting new trees on their land.

Last year the villagers from Jamma’in, with the assistance of internationals, built a simple stone road to get a better access to their olive field. Before long the army installed a roadblock rendering it inaccessible by motor vehicle.

Israeli military invasions are frequent in the village, often it is alleged that the village is harboring terrorists or one of its residents has attacked a settler. A few days ago a settler from Ariel was actually shot, and although the attacker’s origin is unknown, the army blocked the road connecting Jamma’in with the main road, forcing the villagers to travel extensive distances to reach the village. This is an example of collective punishment, which is illegal under the Geneva Convention, but all too frequent in West Bank and Gaza.

A fence separates the village from the main road. In no way does it provide any extra security to either of the settlements but merely serves to impede villagers access to their fields.

The population of Jamma’in is growing. Opportunities to build new houses, however, are extremely limited as building is only allowed in area A, and the village is closely bound by area B. House demolitions are frequent along the area A/B boundary, worsening the housing crisis and devastating families. Class sizes in the village school now exceed 50 children in one small room as the school building has no room to expand.

In contrast, Ariel is expanding. Currently there is only a fence along the proposed route of the apartheid wall and it is feared that the route of the wall will be diverted upon completion to annex the villages water source. The annexation of Palestinian water sources by the apartheid wall is an under-reported but integral aspect to the occupation. This process, along with the incursions into the West Bank the wall makes around Salfit and Jerusalem, greatly undermines the chance of setting up of a viable Palestinian state.

Ten years ago the villagers set up a womens center, staffed by local volunteers. Activities include coaching children through their exams and helping them with any problems they may have at school. They also have a library and are going to give several workshops, including computer lessens. Another initiative is a campaign against violence towards women, the center organises demonstrations and actions to raise public awareness of this issue. They are looking for other womens organisations around the world to work with, if you are involved with one and are interested in becoming a partner organisation to the Jamma’in womens center the e-mail addres is: neevein@yahoo.com