New
Home / In the Media / Haaretz: The fruits of his efforts lie on the wrong side of the separation fence

Haaretz: The fruits of his efforts lie on the wrong side of the separation fence 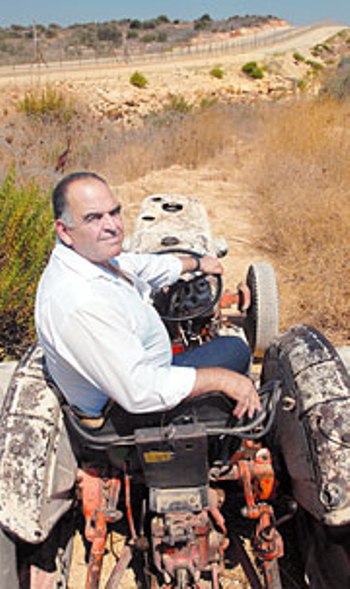 Sharif Omar Khaled had a little bit of satisfaction last week. His guava trees bore fruit for the first time. They had ripened relatively early, he said, because of the hot weather.

Sharif Khaled, who is known to everyone as Abu Azzam, looks like a moshavnik from days gone by. True, he doesn’t have a mustache, but he has a little paunch, an old tractor with a wagon and he can talk about his trees without end: olive trees, citrus trees, avocado, apricot trees,
almonds, guavas. His greatest pride is his loquat orchard: 14 dunams last year yielded 47 tons of fruit. A most impressive record.

In the past two months, Abu Azzam has seen his 3,600 trees only from a distance, from the top of the hill where his village, Jayyous, lies. When I visited this Palestinian village (not far from Qalqilyah) some four years ago, I felt as if I were in a moshav – tractors with drivers in
mud-covered rubber boots filled its streets.

This feeling has dissipated. The number of Jayyous residents who engage in agriculture has decreased for a simple reason: the separation fence. In his area it was completed three years ago and it cuts off the residents of Jayyous from their lands. To reach their farm land, they require a permit from the Civil Administration, and these are given out less and less often. Only 90 of the 4,000 residents of Jayyous are today permitted to work their lands. For three years, Abu Azzam was one of the lucky ones who received a permit. On June 23, he was informed that the permit would no longer be renewed, “because of opposition on the part of security
elements.”

Abu Azzam is not the only person whose permit was not renewed. In the past few months, people in Jayyous say, 29 farmers have had their permits canceled, all of them ostensibly for security reasons. In Abu Azzam’s case, this refusal seems surprising, in the best-case scenario, and evil in the worst case.

Abu Azzam goes abroad three or four times a year. He has been to Sweden, Britain, India and Spain. Now he can chat a little in Italian after studying for three months in Pisa. But he cannot go to his loquat trees.

The word “coexistence” has all but disappeared from the lexicon of the Israeli-Palestinian conflict. But not with Abu Azzam. He struck up ties with Israelis who participated in the protests against building the fence in the Jayyous area four years ago, and since then he has taken pains to nurture those ties constantly. Every year hundreds of Israelis come to
help him and other farmers from Jayyous with their harvesting in fields that have remained on the Israeli side of the fence. “They don’t want money and even bring along their own food,” Abu Azzam says with admiration. “They simply want to help us.”

Abu Azzam particularly remembers one of the Israeli acts of assistance: In December 2004, Israeli bulldozers pulled up several hundred olive trees in a private plot belonging to one of the residents of Jayyous. “The Israelis came to replant the trees,” he says. “They walked several kilometers on foot because the army did not permit them to bring their vehicles to the
fields. Even the elderly among them went on foot. How old is Uri Avneri? He also walked. We were altogether some 50 Palestinians, 200 Israelis and 100 policemen and soldiers. Several hundred villagers from Jayyous watched us from behind the fence. They were extremely moved. It was a very good feeling to see the Israelis planting the trees with us.”

But let us not get confused. Abu Azzam is a thorn in Israel’s side, albeit a small thorn. He travels a great deal abroad and on most of his trips speaks out against the “apartheid fence.” He was part of the Palestinian delegation to the International Court of Justice in The Hague, as a
“farmer from the area,” and he says things that are unequivocal and scathing. He appears in international forums abroad, and sometimes his confrontations with Israeli representatives end in unpleasant tones. This year in February, for example, he participated in a discussion at
Cambridge University. “The Palestinian delegate in Briatin did not arrive, and I was the sole Palestinian in a forum with about 10 Israelis,” he says. “They asked me whether suicide bombers can be part of a peace process. I was impolite and asked them whether attacks by an Apache helicopter on schools could be part of a peace process. There was an unpleasant argument.” Did these scathing remarks lead to the cancellation of Abu Azzam’s permit? It is possible.

A Civil Administration spokesman responded that Abu Azzam had a hearing before a committee that considered his request to renew his permit. The request was considered “bearing in mind the security needs of the State of Israel, and it was decided to turn it down.” Abu Azzam says that the committee members asked him where he had gone the last time he visited abroad. “I said that I was in Sweden in May, and then they asked me ‘where
were you in February?’ I had the feeling they were talking about the conference in Cambridge.”

Perhaps there is another reason. One of Abu Azzam’s friends once warned him that eventually they would cancel his permit to work his fields. “Your problem is that you have too many contacts with the Israeli left,” his friend told him.

Either way, Abu Azzam is convinced that the Israeli authorities are not in favor of ties between Israelis and Palestinians. He views the lack of ties as one of the reasons that the number of Israelis who participate in the activities he has organized has not grown. “It is as if the Israelis are not interested in knowing what is happening on the other side,” he says.
Is Abu Azzam indeed a security menace? Anything is possible, but on the face of it, at least, it appears that this possibility would be strange. He is 65 years old, a former Communist, and the distance between him and Hamas is very great. He has been arrested only once, 20 years ago, for refusing to evacuate part of his lands in favor of the nearby settlement of Tzofin. One of his sons was detained for nine months under administrative detention, but that was more than three years ago. Another of his sons always gets permits to go to Haifa port to fetch goods for the company he runs in Ramallah. This son, too, by the way, did not get a permit from the Civil Administration to go to the family’s fields. He can travel to Haifa but not to his father’s guavas and loquats.

Sources in the Civil Administration say that attempts were made on their part to persuade the Shin Bet security service to give Abu Azzam a permit, but the Shin Bet was adamant in its refusal.

Abu Azzam has a simple explanation for this persistent refusal: “They want us to forget about our lands, for us to emigrate from here.”