When a young Ramallah bank employee returned home to Haris shortly after midnight on May 13, 2007, he was confronted by soldiers who suggested he was driving a stolen car and carrying stolen money. He was kept on the road for an hour and a half, subjected to searches and questioning, and finally allowed to leave after police had arrived and conducted another inspection. 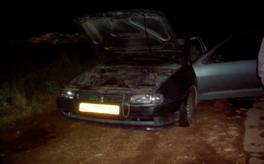 The young man was first confronted in front of his house by soldiers, who demanded he back his car up to the entrance of the village a few metres away. There, they made him lie down on the ground, which was muddy from rain. They suggested that his car was stolen and searched it fully, making the young man open the hood and trunk. The man had purchased the car over two months earlier from someone in a neighbouring village; his father said police from nearby Ari’el settlement had been by the family home eight days earlier to check on the car, and did not consider it to be stolen property.

Soldiers also searched the young man’s bag and asked why he was carrying so much money. The man explained that his job requires him to travel throughout Salfit to collect money from bank customers wishing to make deposits into their accounts, as there is no branch of this bank in Salfit. The man must often visit customers late in the evening after they have returned home from their jobs, often in settlements in Salfit. He then makes the cash deposits the following day in Ramallah. The young man was carrying his bank ID card with him when he was stopped.

However, when IWPS arrived on the scene, a soldier was still suggesting the money and car might be stolen, and said the young man would be detained with his car near the village entrance until police arrived. At one point there were nine soldiers and three jeeps at the village entrance (compared to the young man, an older brother and their parents, a friend who was interpreting for the family, and two IWPS team members). One soldier positioned himself in a small field to the side of the road, pointing his gun toward the houses in the distance, prompting the young man’s mother to remark that “we are not afraid as they are, with their guns.”

Police finally arrived shortly after 1:30 a.m. and after yet another inspection of the car, allowed the young man to go home with his family.

The village of Haris has also suffered in recent days from army incursions and checkpoints, with so-called “flying” checkpoints having been set up after dark, near the entrance to the village, on May 4, 5 and 6. The young banker and his family live on the main road of the village just inside the entrance, and so are particularly affected by such army actions.

IWPS withholds this information as a courtesy to those involved. However, we will do our best to furnish you with all the relevant information you may require. Photos by Beth