40 Children Without a Roof

Demolition of Palestinian homes in Attir
by Yeela Raanan, Regional Council for the Unrecognized Villages in the Negev, 21 May 2007

Today, Monday, May 21, 2007, again the government of Israel again demolished homes of its citizens. This time in the village of Attir, north of the town of Hura. The government demolished four homes. About 40 children were left without a roof over their heads and with harsh memories they will carry their entire lives.

In the 1950s the government of Israel uprooted the Abu-Alqian people and relocated them in the location they are living until today.

Ahmad built his home in the 1990s. The government wanted to move him and his entire extended family to the town of Hura. Despite wishing to maintain a rural community way of life, despite living off animal husbandry, despite the government’s wish to build a village for Jews in the place of his village, because of the threat of his home being demolished, the extended family – several brothers – agreed to move to Hura. They came to an agreement with the Authority for the “Advancement” of the Bedouins on the location of a neighborhood in Hura that will host their extended family.

There were two final points to settle with the Authority: the Authority was willing to allow single young men from the age of 23 to purchase land for homes, while the family wanted the young men from the age of 18 to have this right. Especially since the Authority was not willing to allocate space for future family home purchases. The second point was the amount of compensation that the families should receive. The government decided that $25,000 was the cost of the large stone buildings the families were leaving behind, and the families had no legal way to refute this. Of this half would go towards the purchase of the land on which the new house was to be built. This left the family the ridiculous sum of $12,000 with which to build a new home. The family requested a true estimate of the cost of building a new home similar to that they had to leave.

At this point the Authority lost patience and decided that instead of negotiations, they will demolish. Now Ahmad and the others don’t have a negotiation chip – they have no home to leave… 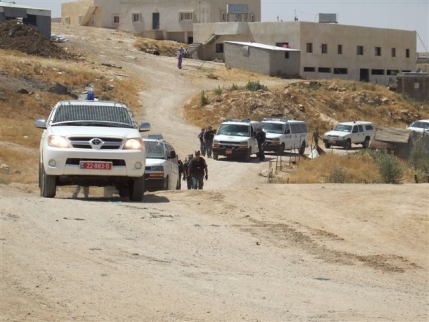 There are several questions one may ask from what occurred today:

· Was it really less expensive to employ a helicopter, eight buses full of police people who were brought from the center of Israel, five bulldozers, scores of large cars full of more police people – hundreds, or maybe thousands of police people, rather than agreeing to the requests by the families for more fair compensation?

· Will this line of action by the Authority bring forth many more people happy to give up their lives in the villages, and negotiate with the Authority on the conditions of transfer to the new locations demanded by the government?

· Do we really want the gangsters who run the Authority to be those who define for us the relationships with our neighbors in the Negev?