New
Home / Reports / Tragic, but not enough to mention

Tragic, but not enough to mention

The Untold Stories: Tragic, but Not Enough to Mention
by Anna in Palestine

Today I visited my friend Dawud in Kufr ‘Ain for the first time since he lost his six-month-old baby at Atara Checkpoint. It was heartbreaking to hear the details of the story from a man who just one month ago was asking me when I would come visit his family for pleasure, not just to take a report. He said there was more to Palestine than the sob stories. But today was all about grief. We watched a video of the funeral in silence, and saw Dawud’s mother break down and say she couldn’t take it anymore. She’d already lost two sons to natural causes, but apart from moderate and treatable asthma, Khalid had been a happy, healthy, chubby little boy.

Last time I visited Kufr ‘Ain I took reports from one family after another regarding nightly incursions by the Army. A 14-year-old girl told me how the soldiers woke her, her mother, and her five younger siblings (her father is working in the United States) up in the middle of the night with sound bombs, forced everyone out in their pajamas with no shoes and isolated the young girl to question her before enclosing the mother and children in their living room and ransacking the house. She said the soldiers put explosions in her room and in the family’s well.

Another family told me how they were woken with sound bombs, rushed out into the cold, and then the young men were stripped, handcuffed, and lain on their front lawn before being taken to a neighbor’s living room for interrogation. The neighbor’s family was meanwhile locked in their bedrooms with the lights off, warned against any sound or movement.

There were more stories. Too many, in fact. Eventually I had to stop taking reports, partially because I had to be somewhere, but more because as I recorded the stories I had a sinking feeling that the incursions were simply too common, too unremarkable to catch anyone’s attention. This would not be a human rights report that any legal or humanitarian organization would follow up with.

Major operations in Nablus or Ramallah make headlines, but incursions into many small West Bank villages are just a part of daily life. For example, for the past two months, the Army has come nightly to Marda village, throwing sound bombs, arresting men, abducting boys. They steal IDs and refuse to return them until their holders give names of kids in the village who put stones in the settler road that cuts through Marda. They spontaneously shut the village completely, preventing residents from entering and visitors from leaving. Two weeks ago soldiers broke into the house of a family with three sons. The middle son Ahmad, 19, who was studying for an English exam the next day when he heard soldiers outside, told me his story:

“I left my books to go see what all the commotion was about. There were about 14 soldiers total surrounding my house, and three jeeps. Soldiers were kicking our front door and throwing sound bombs. When the soldiers saw me, they grabbed me and began to hit me. My parents and my brother Qutaiba–he’s only 13–tried to intervene but the Army pushed my mom and dad to the ground and hit Qutaiba in the stomach. Each time my little brother tried to stand up they would punch him in the gut again, and my mother began screaming for them to stop. It seemed like each time she screamed they beat him again. Suddenly my mother began to wail and I saw that two soldiers were covering Qutaiba’s face with their hands so that he could not breathe, suffocating him until his face began to turn red. Eventually they allowed him to breathe.”

I asked Qutaiba what happened after that.

“The soldiers blindfolded and handcuffed me and Ahmad and brought us in their jeeps to the entrance of our village. They dragged me out of the jeep by lifting my cuffed hands behind my back, which hurt my shoulders. Several soldiers beat me with their fists, bats, and guns, and then they started asking me questions about which village boys were throwing stones. I told them I was cold and sick, and one soldier said that this was nothing; he would punish me to the point of death. They took my cap and began throwing it above my head, laughing, making fun of me. After half an hour they got bored and left me to walk home. They drove away with my brother still blindfolded and handcuffed in the jeep.”

Ahmad continued his story when Qutaiba had finished: “It was terrible listening to my little brother being beaten, and I was almost grateful when we drove away. The soldiers took me to the Ariel police station, where they beat me for several hours all over my body, especially in my head and temples. All the time I was blindfolded so I could not anticipate where the next blow was coming from. It was very scary. One soldier put his boot in my mouth. I asked the commander for some water and he told me to ‘Go to Hell.’ Suddenly one of them kicked me very hard in the groin and everything went black. The next thing I knew they were splashing my face with cold water, and when they saw I was awake they began to beat me again, accusing me of throwing stones, destroying settlers’ cars, and being a member of Hamas. After four hours they finally let me go and I walked home.”

Ahmad’s father Rasmi cut in. “When my son came home after 1am, it looked as if he had taken a blood shower. He had to go into school the next day but his English teacher let him postpone the exam. I teach my children good values, to respect others and to never use violence. But how can they continue to be peaceful when they are constantly surrounded and threatened by so much brutality? I’d like to live peacefully with the Jewish people. They build their state, and we build ours. They take care of their children, and I take care of mine. I lived in Chicago for 15 years. I know that in America it’s a sin to hit your children. Here, soldiers can hit other people’s children and nobody says a thing! But even if they kill my children, I will not kill theirs. These are my values, what my parents taught me and what I teach my children.”

As Rasmi spoke, a car drove by and the whole family jumped. They laughed nervously when they realized it was just a neighbor. Rasmi said the soldiers returned three days later and took Ahmad again, this time with his older brother Samiah. They blindfolded and handcuffed them, and brought them to an abandoned warehouse off of the main road. Ahmad was still fragile from his fresh head wounds, but the soldiers still beat him and his brother, first in silence, then cursing them and accusing them of harboring weapons. When it began to rain, the soldiers brought the young men outside, removed their jackets, and began hitting them again. Eventually they let the boys go, after stealing all the money in Samiah’s wallet, 70 Jordanian dinars and 60 Israeli shekels. This in addition to 400 shekels that they stole from the house the first time, all together the equivalent of more than $200 (not to mention the CDs and toys that they broke when they ransacked the home). They also took the university documents that were in Samiah’s wallet.

Although Marda villagers call us more than most, Marda’s situation is far from unique. Most village’s have simply given up on us. We recently met a 56-year-old grandmother named Hilwe who was shot in the face three weeks ago by soldiers hiding behind a corner in her village, Qarawat Bani Hassan. One rubber-coated metal bullet (don’t let the name fool you; rubber bullets can–and do–kill) grazed her face, tearing and detaching a segment of her right nostril, disfiguring her and requiring 20 stitches. I asked Hilwe what the soldiers were doing in her village and she shrugged, “They come every day. It’s nothing special.” I asked why nobody had called IWPS to respond to the incursions and Hilwe’s brother answered straightly, “What are you gonna do, take a report?” 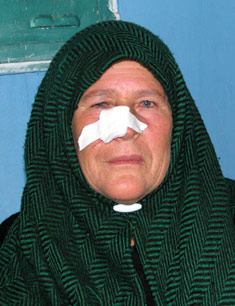 We encouraged the family in Qarawat to call us more, but I won’t blame them if they don’t. How much are we really helping by writing these reports that policymakers and even most activists will never read? How much are we just creating false hope and forcing families to relive painful episodes that they’d rather forget? The best we can do is to offer our services and be honest about what we can and cannot do. We cannot bring criminals to justice; we cannot get innocent men out of jail; we cannot keep the soldiers from invading, or settlers from stealing land. Pretty much all we can do is write and look sympathetic, and occasionally remind soldiers that we are watching.

Even our village seems to have given up on us. The jeeps still come, but nobody calls. Yesterday I heard by chance from a friend that a boy from Haris was kidnapped by soldiers because he was wearing too much olive green. They said that color is for the Army. The soldiers drove him onto a quiet road between our village and Kifl Haris, made him take off all his green clothes (everything but his underwear), and left him half-naked to hitch his way back. He hid behind the olive trees until one car took pity on him and brought him some clothes.

Like Ahmad’s and Hilwe’s, the Haris boy’s story will never make headlines. But there will always be the stories that do get out. The well-known Haaretz journalist Gideon Levy recently followed up on two of our recent reports: Dawud’s baby and the 11-year-old human shield. The latter made it to the New York Times and other mainstream media, and the Israeli Army has officially stated that it intends to look into the human shields charges (meanwhile, other Israeli soldiers and spokespeople have stated that in fact the invasion “was pretty boring, we barely felt any action.”

Anna Baltzer is a volunteer with the International Women’s Peace Service in the West Bank and author of the book, Witness in Palestine: Journal of a Jewish American Woman in the Occupied Territories.