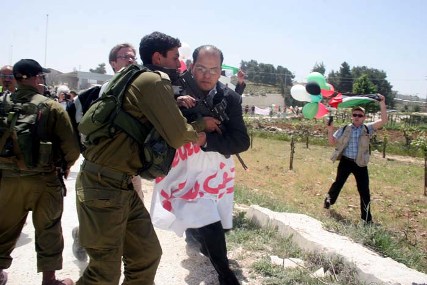 The southern villages of Bethlehem have been organizing weekly nonviolent resistance activities to the building of the Apartheid Wall that will ultimately separate the farmers from these villages from 70% of their agricultural land.

The activity this week witnessed an evolution of size and strategy. For the first time, over 200 participants (Palestinians, Israelis, and International) joined in the direct action; for the first time, the committee responsible for organizing the action included new members from villages in the South of Bethlehem and activists from the northern villages of Hebron (Beit Umar), and for the first time their was a clear increase in the number of International and Israeli activist. 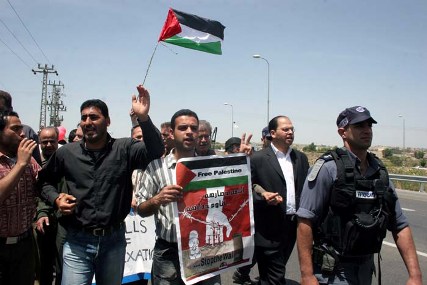 On the strategic level, the success of the previous actions empowered the organizers to target a location that was perceived as impossible to reach, the Bethlehem-Hebron Road (also know as Road 60). Once the wall is completed in this area, Palestinians will not be able to travel on this historic route which will only be used for the cars of Jewish settlers. Palestinians will only be allowed to use back and side roads increasing the duration of any trip by over 200% at minimum (i.e. to go from Bethlehem to Hebron will take 1 hour instead of the usual 15 minutes).

The goal of this nonviolent action was to go and protest on this road and to express our opposition not only to the building of the wall but also to the continued existence and expansion of settlements that are the cause for building the wall, (the wall guarantees the land for future settlement building and expansion). 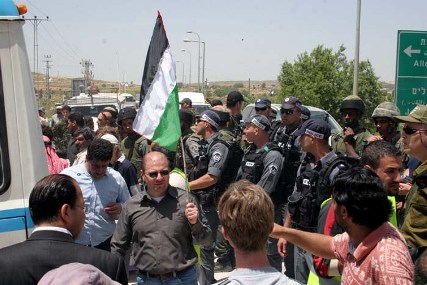 As soon as we began the procession, tens of armed Israeli troops came and attempted to stop the protest from moving to the land. The demonstrators broke into the army wall that was created and we continued our procession to the land near the main road where the Israeli soldiers used violence again to try to suppress the action (several were injured including journalists). Several people gave talks denouncing the building of the wall and called for a real and justice peace between Palestinians and Israelis. Friday prayer was then conducted on the land. On the return back to the location where we began the action, the Israeli soldiers again pushed and yelled. It was truly wonderful to see the commitment to nonviolence by the more than 200 participants.

The level of frustration by the Israeli army to the success of the nonviolent activity was not witnessed on the site, but the retaliation took place on our way to our homes. Israeli army check points were placed on the entry ways to all locations where the participants came from and cars that were at the sight of the action were stopped, the people were insulted, some were forcefully removed from the cars and then cars and individuals were searched for almost an hour. Of course the Israeli army knew there was nothing to search for, but that seemed to be the only response they can think of to “punish” the participants for being successful in this action.

My hope is that nonviolent action does not only give us an opportunity to show the world our rejection of injustice, but to also give us an opportunity to open the eyes of those who are doing the injustice to truly think about what they are doing. Yes, at first it may be frustrating to them as we challenge their believe system and ideologies, but then their humanity will overcome their prejudice.