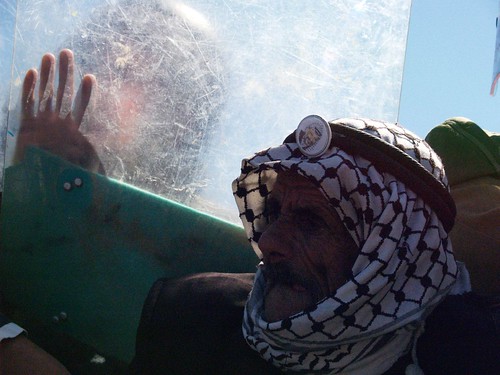 This Friday, March 30th, marks the 31st Anniversary of Land Day, a day commemorating the killing of six Palestinians in the Galilee on March 30, 1976 by Israeli troops during peaceful protests over the confiscation of Palestinian lands. Land Day links all Palestinians in their struggle against occupation, self-determination and national liberation.

The central theme for this year’s Land Day focuses on Israel’s Apartheid Wall. Though Israel claims the Wall is being built for “security reasons,” the Wall annexes the land it seizes into Israel, and illegal Israeli settlements are built on the appropriated land, forcing into ghettos Palestinians who once lived and worked on the land.

This Friday and Saturday, Palestinians across the West Bank and Gaza will demonstrate against Israeli Apartheid and the destruction of their land. They will be joined by Israeli and international solidarity activists in the following villages: 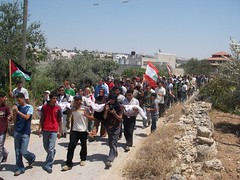 1. Bil’in, a village outside of Ramallah, has become a symbol of non-violent resistance to Israeli Apartheid. Villagers and internationals have been standing in solidarity for over two years in Bil’in, demonstrating against the completed Wall, which has stolen over 60% of the land from the village. The demonstration is expected to begin after midday prayers.

2. Umm Salamuna is a village south of Bethlehem. Construction of the Apartheid Wall has recently begun here. Recently, Palestinian, Israeli, and international activists have marched to the Wall and have halted the destruction of the land. The demonstration is expected to begin after midday prayers where they will march to the land and give speeches.

3. In Qaffin, a village north of Tulkarm, the Apartheid Wall has existed since 2003. Activists are invited to stay Thursday night in the village. At noon, the following day, the demonstration will begin with speeches, and the demonstrators are expected to make a 10 minute march to the site of the Wall.

4. SALFIT is a Palestinian district whose land has paid a devastating toll due to Israel’s Apartheid Wall and the nearby settlements. Palestinians from the Popular Committee Against the Wall and other communities will hold a non-violent demonstration against the Apartheid Wall and the illegal Israeli settlements. The demonstrators are scheduled to meet at 11am at the Al Abrar Mosque in the center of town.

5. IZBAT at TABIB, in the Qalqilya region, is also feeling the strangling effects of the Apartheid Wall and settlements. Palestinians from Izbat at Tabib have recently received evacuation orders from the Israeli army. Residents have stated that they will resist there orders. These residents, and Palestinians of surrounding areas, are planning to meet at 11am in the center of the village and hold a rally, where representatives will speak about the effects of Israel’s Wall and Occupation. Because Izbat at Tabib is in “Area C,” which is under complete Israeli military control, organizers of the demonstration are anticipating intervention from the Israeli army. The organizers, however, are also expecting a large turnout of international and Israeli activists, as well as from the surrounding Palestinian areas. 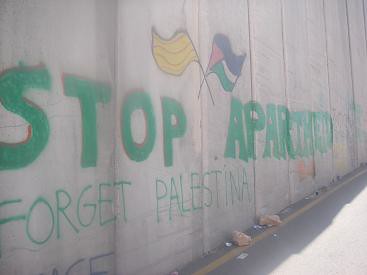