by If American Knew 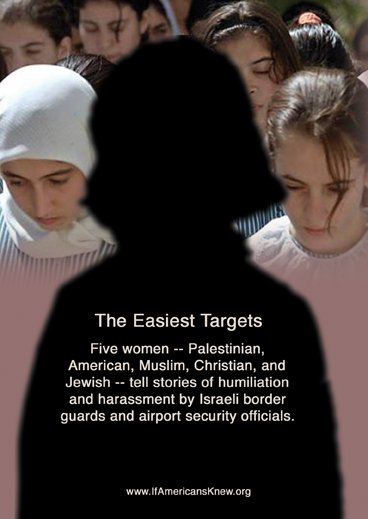 Israeli officials have been regularly strip-searching children for decades, some of them American citizens.

While organizations that focus on Israel-Palestine have long been aware that Israeli border officials regularly strip search men and women, If Americans Knew appears to be the first organization that has specifically investigated the policy of strip searching women. In the course of its investigation, If Americans Knew was astonished to learn that Israeli officials have also been strip searching young girls as young as seven and below.

According to interviews with women in the United States, Israel, the West Bank and Gaza, Israeli border officials periodically force Christian and Muslim females of all ages to remove their clothing and submit to searches. In some cases the children are then “felt” by Israeli officials.

Sometimes mothers and children are strip-searched together, at other times little girls are taken from their parents and strip-searched alone. Women are required to remove sanitary napkins, sometimes with small daughters at their side. Sometimes women are strip searched in the presence of their young sons.

All report deep feelings of humiliation. Many describe weeping at the degradation they felt.

“I remember crying and pleading with my mother,” Gaza journalist Laila El-Haddad recalls of an experience when she was 12-years-old, hoping that her mother could convince the Israeli official to allow her to keep her undershirt on. But parents are unable to shield their children, El-Haddad and others report.

“They had machine guns,” El-Haddad explains. “We just had to submit.” El-Haddad, who holds a Masters degree in Public Policy from Harvard’s Kennedy School of Government, believes that the intention of the strip searches is to humiliate Palestinians so that they won’t return to Palestine.

Oregon attorney Hala Gores remembers being strip-searched at the age of 10. Her family, Palestinian Christians from Nazareth, were leaving Israel because of Israeli discrimination against Christians. Gores has never returned to her family’s ancestral home in Nazareth, she says, in part because she does not want to repeat the experience of having no control over what is done to her.

The Israeli policy appears to target only Christian and Muslim children, and is equally applied to those with Israeli citizenship and citizenship in other countries, including native-born Americans. There are no reports of Jewish children being strip-searched.

New Jersey stand-up comedian Maysoon Zayid describes being strip-searched at Ben Gurion Airport when she was “seven, eight, nine years old” on family trips to visit her parents’ original home in Palestine. On her most recent trip in July 2006, Maysoon, an American citizen, had her sanitary pad taken by officials in Ben Gurion Airport. When the search was completed, she says, the Israeli official in charge, Inbal Sharon, then refused to return her pad or allow her to get another.

Zayid, who has cerebral palsy and was sitting in a wheelchair, was then forced to bleed publicly for hours while she waited for her flight.

Zayid, a former class president and yearbook editor at New Jersey’s Cliffside Park High School known for her irreverent comedy routines and strong personality, describes sobbing uncontrollably. “No one spoke up,” she remembers. “There were several women, including the woman who was pushing my wheelchair, none of whom said a word.”

When she boarded her flight, Zayid recalls, “The flight attendants looked at me in disgust.” She told them what had happened, and the attendants then gave her some of their own clothing to use.

In addition to taking her sanitary napkin, Israeli officials also confiscated medication that Zayid is required to take when flying. As a result, she vomited repeatedly throughout the 12-hour flight.

Zayid, who founded a program for newly disabled Palestinian youths, many of them permanently disabled from attacks by Israeli forces, was so depressed by her treatment that she determined never to return. “But that’s what they want,” she says, “They want us to get to the point where we don’t go back.” She says that she is already planning to return to her volunteer work in the West Bank.

Israeli practices vary and seem to be applied randomly, from elderly women to small children. In some instances women are taken into a room alone and are left sitting naked for hours. At other times they are strip-searched in groups, their clothes thrown in a pile. When they are finally allowed to get dressed, they describe having to rummage through the heap of clothing, naked and barefoot, to find their own garments.
Jewish Holocaust Survivor

While these policies largely target Palestinian and Palestinian-American women and children, some non-Palestinian Americans also report being subjected to strip searches by Israeli officials.

St. Louis resident Hedy Epstein, whose parents and extended family perished in Nazi camps, and whose story is featured in the Academy Award winning documentary “Into the Arms of Strangers: Stories of the Kindertransport,” reports being strip searched three years ago following her participation in nonviolent protests in the West Bank. Epstein, who was 79 at the time, describes being forced to bend over for an Israeli official to search her internally.

The strip searches appear to be illegal under numerous statutes. The Geneva Conventions, to which Israel is a signatory, prohibit: “Outrages upon personal dignity, in particular humiliating and degrading treatment” and specifically emphasize: “Women shall be especially protected against any attack on their honour…”

Article 2 of the Convention on the Rights of the Child states: “No child shall be subjected to arbitrary or unlawful interference with his or her privacy…”

In the US, such policies would appear to violate child abuse statutes. The state of Utah, for example, defines Child Abuse as: “Any form of cruelty to a child’s physical, moral or mental well-being.” The Encarta Encyclopedia defines child abuse as “Intentional acts that result in physical or emotional harm to children.”

While the If Americans Knew investigation focused on practices concerning women, many interviewees reported frequent random strip-searching of males as well, including American citizens, children, and the elderly.

While the practice is widely applied, many people find it too humiliating to speak of. One 68-year-old Christian businessman, who had been stripped naked at Ben Gurion airport in 2006 before being allowed to board his flight to return home, had never revealed his experience to his family until he learned of the If Americans Knew investigation. He then explained to his daughter why he had previously told her that he might never return to his original home, now in the state of Israel.

Christians, a thriving community that made up approximately 15 percent of Palestine’s population before Zionist immigration and the creation of Israel (Muslims were 80 percent and Jews 5 percent), have now dwindled under Israeli occupation to approximately two percent of the total population.

Israeli spokespeople and sympathizers have bristled in recent months at the title of a book by former President Jimmy Carter, “Palestine Peace Not Apartheid.” In reply, Carter has emphasized that the Israeli “apartheid” he is describing is limited to the West Bank and Gaza. Many analysts have disagreed with Carter, providing evidence of pervasive discrimination within Israel itself. The If Americans Knew finding that Israel has been routinely strip-searching non-Jewish citizens of Israel would also indicate a wider policy of Israeli discrimination.

Since American taxpayers give Israel over $8 million per day, the Council for the National Interest, a Washington DC-based lobbying organization, is organizing a campaign to call on Congress to demand that Israel end these policies.

“We are extremely upset to learn that Israel is using American tax money in ways that degrade and humiliate women and children,” says CNI President Eugene Bird. “We call on all Americans to help us on this campaign.” The organization urges people to begin contacting their Congressional representatives immediately, and to disseminate the video report “The Easiest Targets” by If Americans Knew as widely as possible.