Bikes vs. Bombs
by Martinez 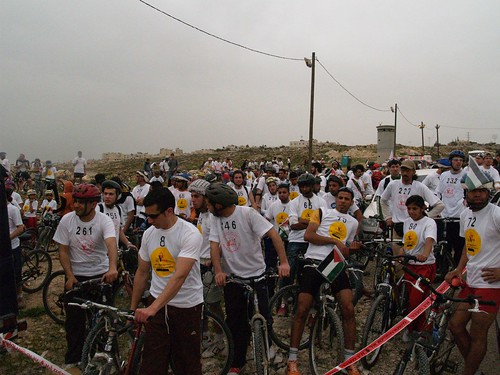 It started out to be a magnificent afternoon here in Ramallah. Being an avid bicyclist back home in Pittsburgh and San Francisco, biking against oil wars, my eyes lit up like a small child in a sparkling candy store when I read the following announcement:

“The East Jerusalem-YMCA’s “Youth to Youth Initiative” is organizing the Palestine International Bike Race, aimed at promoting peace and tolerance among ethnic, religious and national groups in the region. The idea stemmed from the increasing need to stop violating human rights and lift the movement restrictions and blocks which prevent the Palestinians to move freely. Participants from the Palestinian Territories, Israel and different international identities will join the event.”

The race was projected to be the longest international sport event to protest against human rights violations, Israeli checkpoints, and restrictions on freedom of movement.

Ashrav and I arrived at the Playground in Al Bireh around 8:45 am to see 350 bicyclists ready to put the fun between their legs and pedal the 30-some downhill miles to Jericho, near the Dead Sea.

Ash and I registered, received our numbers (191 and 192 respectively), put on the YMCA issued T-shirts, and chose from hundreds of bikes before lining up for blast-off.

There were many nationalities represented. Hundreds of Palestinians, thirty or so Israelis, Danish, American, Spanish, Canadian, all coming together in the intellectual center of Palestine to bike in solidarity against Israel’s current system of Apartheid.

My heart was pounding and I may have been sporting a slight grin as I rounded the corner, 30 bikers from the frontlines.

Palestinian police did their best to keep traffic to the side. They couldn’t help the fact that the track on which we were racing is littered with ditches. (I refrain from using the word “potholes” where, in Pittsburgh, though they are many, they are no where in comparison to the holes on this road).

“Why,” do you ask, “is this specific road so battered?”

So, dodging the potholes, I made my way past the atrocious Qalandya checkpoint. This checkpoint is one of the biggest in the West Bank. Built by the Israeli army, the Machsom (in Hebrew), looks more like a fortress styled terminal, equipped with an 8-meter high wall, sniper towers, and is manned and womanned by Israeli soldiers, 24 hours a day, seven days a week. 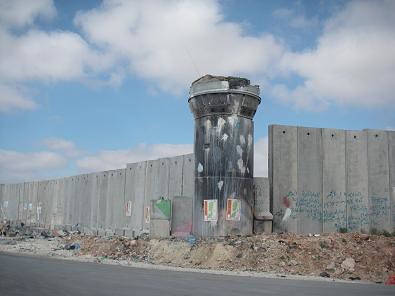 The Machsom separates Palestinian towns from Palestinian villages, and prevents access to Jerusalem, the economic, social, and spiritual center of Palestinian life—which is 10 minutes away from the Israeli-controlled fortress. In order to get around the checkpoint, Palestinians must take a time-consuming route through rugged terrain to reach hospitals, schools, and family members—destinations otherwise reached in a matter of minutes.

Making a slight turn onto the road to Jericho, I was filled with a sense of joy and freedom via the bike ride against Apartheid, the Tour du Freedom. The fresh spring weather hitting my face, the rocky cliffs and bright green grass on either side of me, Palestinians at crossroads cheering us on.

Those wheels of justice came to a screeching halt further down the road.

The Israeli army was stopping the freedom racers further down the track. Israeli flags were waving above army jeeps and police vehicles. Along with the bike race impasse, Israeli soldiers were refusing passage to Palestinian traffic. 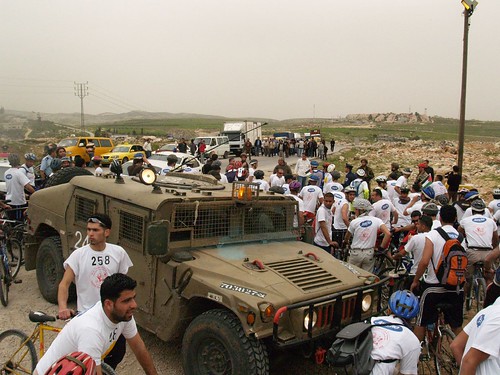 As the rest of the 330 bikers accumulated there at the checkpoint, so did the traffic, for miles it seemed. But the army wasn’t budging. Apparently, a bunch of Palestinian, Israeli, and international bicyclists were too much a threat to the army. Bikes vs. Bombs. And the match was being had right there on the road to Jericho.

An illegal Israeli settlement could be seen in the distance. And the continuation of Israel’s Wall of Apartheid could be seen on the left, and felt in the stomach, a nauseating presence that just won’t go away (yet). 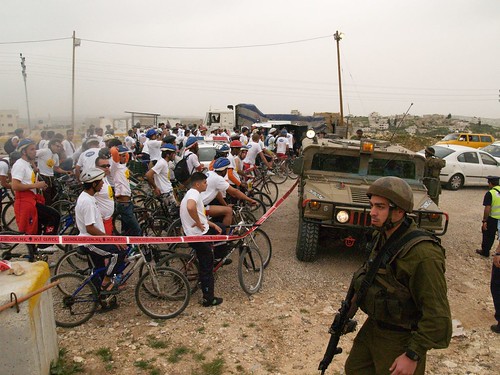 The Israeli soldiers called for back up. They revved their army engines. We straddled our bikes. The soldiers pulled some caution tape from their trunks and sealed us into a makeshift sty, like pigs on bikes. Some negotiating between Palestinians and the army ensued. But the army wasn’t budging. Then Israeli bikers tried to negotiate. Still, Israel’s Occupation Forces would not budge.

For over an hour, the pedal revolutionaries, visions of Jericho in mind, were forced to stand at the side of the road. The soldiers opened the road for traffic, but not for two-wheelers. 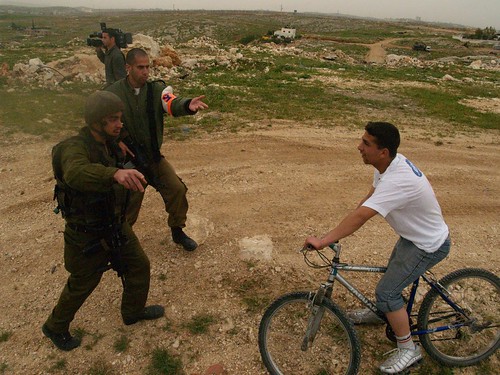 The energy was starting to bubble over. A woman from Holland had enough with waiting. She crossed the line, so to speak, and started heading to Jericho. She was approached by the soldiers, however, who began to push her around. Majd, a Palestinian journalist for This Week in Palestine, biked on over to the woman to and protect her. The army, instead, decided to rough him up and detain him.

A spokesperson from the YMCA arrived. The army handed him a bullhorn and the race was officially declared finished. No trophy ceremony, as was planned when we reached Jericho. No speeches to the Palestinian and international press about how tens of nationalities came together to bike towards freedom. Instead, the scene was filled with anger, despair, and hundreds of empty bikes lying at the side of the road.

The adrenaline that was overflowing just 2 hours before now evaporated. All that was left was the stench of Apartheid. Several bikers tried to rally a contingent to pedal themselves around the roadblock. But as more soldiers arrived, so did the fear of retaliation by the Occupation Forces. 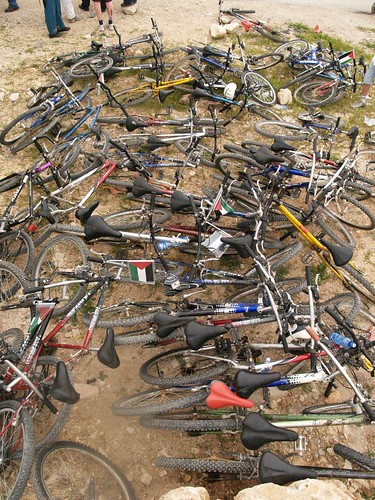 And thus, sadly, after the world’s bike lovers met here on this day in Palestine to pedal in solidarity with the Palestinians against Israel’s system of racial discrimination, against their walls and snipers, tanks and jeeps—the day of Bikes vs. Bombs came to an abrupt end.