‘Azzun ‘Atmah, a village with 1,800 residents located southeast of Qalqiliya, lies three kilometers from the Green Line (Israel’s 1967 border). The settlement Sha’are Tikva was built just east of it, on lands belonging to residents of the village. The settlement breaks the territorial contiguity between the village and two neighboring villages, Beit Amin and Sanniriya. On its western border, the settlement Oranit was built.

The separation barrier in this area was completed in October 2003. The barrier separates the village from the rest of the West Bank and places it in the “seam zone,” the area between the barrier and the Green Line. Residents of the village reach other parts of the West Bank through a gate in barrier, which is open from six in the morning to ten at night. Only residents of the village and Palestinians with Civil Administration permits are allowed to use this gate.

In addition to the barrier, the government decided to surround the village on all sides with another barrier, completely isolating the village within an enclave. The entire route of this additional barrier was approved in principle, but so far the state has only issued orders requisitioning land to enable construction of the section of the barrier south of the village. This section lies north of Route 505. Half of the section, 1.75 kilometers, passes through the village’s land, a distance of about one kilometer from Route 505. The other half passes near the roadway. Construction on the section began on 10 November 2006. 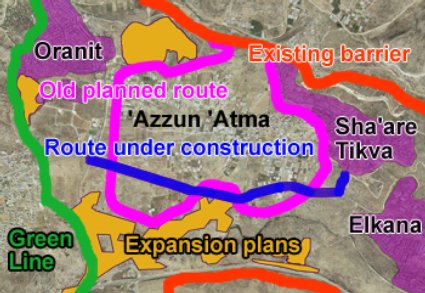 Arial photo of the village of ‘Azzun ‘Athmah and it’s surroundings. Source: Bimkom

Turning ‘Azzun ‘Atmah into an enclave will seriously harm the wellbeing and livelihood of the residents. Until the second intifada, some of the villagers worked in Israel . Since then, about eighty percent of the villagers have been working in agriculture. The new barrier separates the village from 2,000 dunams of cultivated farmland, half of which is owned by village residents and half by residents of Beit Amin, Mas’ha a-Zawiya, and Sanniriya. These lands will be enclosed between the southern segment of the barrier and Route 505. Almost certainly, access to these lands will require a permit and will only be possible during the hours that the barrier gates are open. Past experience indicates that gates are not always open as scheduled. Restricting access to the farmland will inevitably lead to a decrease in farm production, impediments to marketing of the produce, and a decrease in income.

In any event, the justifications for this section of the barrier based on the need to protect close to or on Route 505 are unconvincing. There have not been any incidents of violence by residents of ‘Azzun ‘Atmah against settlers in the area or against motorists on Route 505. In fact, as in many other cases, the route was selected to enable expansion of the settlements near the village – Oranit and Elqana – and establishment of a new industrial zone.

Given that the barrier’s route is illegal and given the grave infringement of human rights the present route causes, Israel must dismantle every section of the barrier located inside the West Bank . If Israel believes that a physical barrier is needed for security reasons, it may run it along the Green Line, or inside Israel . Until the authorities dismantle the relevant sections, B’Tselem calls on the government of Israel to:

* cease construction of the southern section of the additional barrier at ‘Azzun ‘Atma;
* dismantle the section already built, and enable the residents free access to their land;
* return land that it requisitioned to build the barrier;
* open the gate in the separation barrier north of ‘Azzun ‘Atma around the clock and enable the residents to reach other parts of the West Bank and to carry on a normal life.

For a report on an Azzun Atma farmer’s attempt to resist annexation of his land click here.