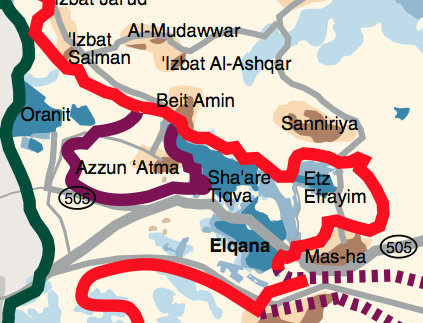 On the November 16th, the Palestinian grassroots organized an event in Azzun Atma village, south Qalqiliya, against the continuing destruction of their land, which began on November 13th. Occupation forces aim to construct a second Wall that will cut the village into two parts, isolating the land on the western side.

Despite the closure of Azzun Atma and the restrictions placed on Palestinians from the surrounding villages, hundreds of people marched to protest the occupation and destruction of Palestinian land. Farmers, politicians, and near-by village representatives marched to the lands threatened by the Occupation. Around 300 people participated in this event. A sizable Occupation force blocked people from going closer than 150m to the land and also restricted journalists from taking photographs of the construction area. The march ended with a sit-in near the threatened lands.

Amjad Omar, the Campaign local coordinator in the village, said: “this new section of the Apartheid Wall will cut the village into two parts and isolate many lands and water wells as well as demolishing parts of houses for the wall footprint”.

He also added that the farmers have successfully managed to delay construction during the past few days through daily demonstrations and the closing of “holes” made in the ground for the Wall. “The occupation bulldozers needed to come back every day to dig again these holes” he said. Around 4000 dunums of Azzun Atma village lands will be isolated behind the Apartheid Wall.

Another account of the same events by an Israeli activist can be read on Anarkismo.net.