Today in Izbat Tabib, in the Qalqiliya region, over 250 Palestinian, Israeli and international activists successfully removed a land mound road block in order to open a crossing for commercial and pedestrian traffic. Despite the military and border police’s excessive use of tear gas and sound grenades, activists were successful in holding a non violent demonstration, and worked in solidarity to remove the concrete blocks, boulders and gravel with their hands. 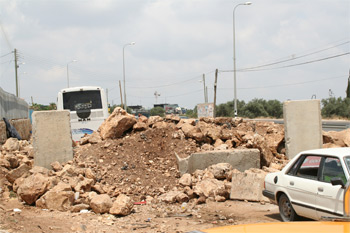 Izbat Tabib is a small village of 300 inhabitants near Qalqiliya. It was established in 1920 and in 1948 it received an influx of refugees from Tubsur, which stood where Raánana is now. The residents of the village are all recognized as refugees (by UNRWA) but the village is not recognized as a refugee camp by Israel. The Israeli government has issued demolition orders for most of the buildings in the village which has motivated the community to organize.

Around 11am, residents of Izbat Tabib along with supporters met for a rally which was disturbed, when two Israeli border police armored jeeps drove through the area provoking the crowd. Following the rally, the attendees marched through the village towards the road block, and though several tear gas rounds were fired into the village, after a brief pause the marchers proceeded peacefully.

The marches reached the earth mound road block and quickly began dismantling the site. Some used hoes to chop rocks and move dirt, while others used small rocks to dig and shovel. While some were digging, others attached straps to the hefty concrete barriers and joined together in large groups to pull the barriers down. Though it took several hours to clear the large concrete blocks, they were successfully dragged away through the strength of many. The demonstrators worked together for hours to remove the rocks, shovel the dirt and drag the concrete blocks until the road block was opened large enough to allow for car traffic. When they were finished, several cars triumphantly drove through the road block.

During the action, approximately 30 Israeli soldiers and police stood watch and occasionally harassed the crowd. In order to prevent military violence a large team of internationals formed a human wall between the soldiers and the road block. This helped to prevent the soldiers from firing into the crowd in order to disperse the demonstrators.

After the road block had been removed, the soldiers began to move quickly towards the workers and opened fire with sound bombs and live ammunition. The soldiers attempted to frighten the demonstrators by aiming some machine guns at the demonstrators while other shot into the air. Despite their efforts, the demonstrators remained steadfast and slowly returned back to the village having accomplished their goal. During the military assault, one international activist was injured when shrapnel from a sound grenade struck him. Despite the Israeli military’s attempts to prevent activists from reaching the action through the use of ‘flying’ checkpoints, Palestinian supporters were able to reach the action and work in solidarity.

Approximately 90 minutes after the demonstrators had left the road block, the Israeli military used bulldozers to reestablish the obstruction and closed the entire crossing. When news of this reached the village, international supporters returned to the crossing and forced the military to allow pedestrian traffic through the crossing through negotiation, observation and accompaniment.