New
Home / In the Media / Open Letter to Ehud Olmert

On last Thursday corresponding to 2/2/2006, the Israeli security forces arrested the Italian citizen Al Abed Mohammad, after he and his companion, Mr. Paraccino Danielle, were held for nine consecutive hours at Allenby Bridge. Both detainees were interrogated, subjected to humiliating naked search and their mobile phones were seized. Later on, Mr. Danielle was freed and informed that he was forbidden from any future visits to the Palestinian lands. Mr. Al Abed was led to the interrogation centre that belongs to the Shabak system in Petah Tiqwa in Tel Aviv.

On 23/1/2006 Mr. Danielle and Mr. Al Abed traveled to the Palestinian occupied lands on a human and judicial mission with the aim to visit two orphans under their sponsorship. They aimed also to visit a number of Palestinian charities in Ramallah, Nablus, Jenin, Tulkarim and Qalqilya, which provide aid to the poor and destitute children and families of these areas. The purpose of the visits was to verify the transparency of the work carried out by these charities as a step in their mission to prepare a report to be submitted to a court in Genoa in Italy. The report was supposed to include information on the disbursements of the donations granted to these charities by the Charity Society for the Solidarity with the Palestinian People (Associazione Benefica di Solidarieta` col Popolo Palestinese), located in Genoa.

Friends of Humanity International hereby expresses its profound concern for the continued detention of the Italian citizen Al Abed Mohamad by the Israeli security forces, and the physical and psychic suffering to which both Mr. Danielle and Mr. Al Abed were subjected. The Organization calls for the immediate release of Mr. Al Abed and for providing every mean to facilitate his return to his homeland where his wife and children are anxiously waiting for his return. Mr. Al Abed’s health condition is the object of his family’s anxiety as he suffers from diabetes.

Thanking you for your cooperation. 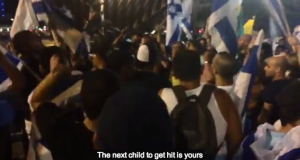 Nablus City: Family left pleading in the night for their sons’ freedom