Mohammad Mansour targeted for standing against the occupation

By Harry
reprinted from his blog www.palestinepal.blogspot.com 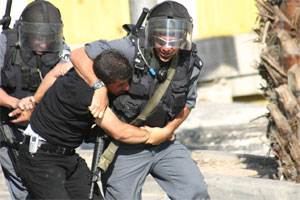 I’ve been working with Mohammad Mansour, a Palestinian activist in the International Solidarity Movement (ISM), since I began work here one month ago. He is to face a trial tomorrow. If found guilty, he could go to jail and quite possibly be tortured. What is his crime? He is an organiser in the non-violent resistance. He was charged with assaulting a soldier, throwing stones and encouraging kids to throw stones. But there is no evidence of this. He was at a demonstration where soldiers were filming and taking high resolution photographs, yet they have no evidence of this.

He is now being charged with involvement in an “illegal demonstration.” This so called “illegal” demonstration occurred in the Occupied Territories. Several times he has fronted to the Israeli Peace Court (actual name) in Jerusalem. Just getting to court is difficult; soldiers at Qalandia checkpoint have tried to stop him from attending his own hearings in the past, calling him a “security risk.”

Despite this, each time he goes to court the prosecution offers him a less unfair deal, with the judge encouraging him to accept it. He was offered to sign a piece of paper saying he wouldn’t be involved in any demonstrations for 2 years, and he refused. The prosecution even offered to drop the entire court case if he paid a small amount of money and despite having the money, he refused. Monsour told me he “refuses to pay one shekel to support the occupation. My friend is in a wheel chair after being shot at a demonstration and I am not going to fund a bullet so they can do that to someone else. I also don’t want to pay because I’m not guilty.”

These words come from a man who is in his mid-thirties, has 5 children, and has been in jail before. The longest he has been incarcerated for is three years, and despite describing to me personal experiences as chilling as Abu Graib prisoners’, he is prepared to go back. Some torture techniques were outlawed several years ago, but torture is still legal. Even those techniques that were banned may be reintroduced if they can prove the suspect is “a ticking time bomb.”

Asking Monsour why he doesn’t drop out of the movement he said, “It is my duty. We are living under occupation and I want to be free. And I will tell you something else: I and many [other] Palestinians have promised ourselves when we get our freedom we will go and help other occupied people, wherever they are.”