It is overwhelming to be awakened to the reality of a military occupation all of a sudden.

Qalandia terminal, is supposed to be the clean and efficient face of the occupation, like an airport terminal with electronically operated metal gates with stop and go signals and X-ray machines, or ultramodern sanitized humiliation.

As soon as I got there, I could see dozens of people crammed up against the metal gates, pushing, yelling, begging the teenage brat Israeli soldiers to let them through.

The only way I was able to get through was by flashing my American passport all over the place and arguing with the soldiers myself to let me through. It was one of the most personally and collectively humiliating experiences I have been through, and confirmed that what is going on here is not just similar to apartheid, but in fact is apartheid. I know it’s massaging my guilt about my own personal privilege, but it really made me feel complicit in the system to be let through while dozens of desperate people who had been waiting much longer than me were pushed back forcibly, just because of the passport I have, which effectively makes me “white”. I know that rationally speaking, I was there alone and could not have done anything to show my solidarity effectively even if I had stayed back and waited, and that in this case I was not an ISM activist but simply an individual “tourist”, but I still felt like a participant in the apartheid system, and I was sweating all over and weak by the time I got out. Especially after seeing one Palestinian man almost get shot in front of my eyes. This poor man had apparently lost it and was trying to climb above the metal gates and yell at the soldiers, and this oversized high school jock got pissed off (as he is properly trained to do) and had his gun pointed and loaded, ready to fire. On the other side (my side) the other people around this man were frantically trying to pull him down before the soldier boy lost his patience and pulled the trigger. Thankfully, that did not happen, and I was happy that as the man was pulled down by the people around him, he managed to twist up a sign above the gates that said something like “One by one. Please be patient.”

That wasn’t the end of it. The taxi I had to take from the checkpoint to the Damascus Gate in Jerusalem was stopped by soldiers at another(“normal”) checkpoint, and another Incredible Hulk got on the bus to “inspect” everyone’s IDs. By bad luck, my suitcase was the one that didn’t fit in the back, so I had it on me and had to open it all up.

And all this was after having gone through two other checkpoints in the same day, the first of which was in the Jenin region, where we were refused to be let through and the two Palestinian ISMers with us made to stand for an hour and a half apart from us. When the two girls in our group tried to go to talk to the soldiers to say what is going on, why are you holding them if their security has been cleared, one soldier who communicated only by yelling pointed his gun at them. I don’t know if this was all an act to make himself feel better, as if it makes him feel more well endowed to aim it, or whether he actually wanted to shoot. All Palestinians going through checkpoints have to be “cleared” to make sure they aren’t “wanted” for heinous crimes such as resisting illegal military occupation. I have seen guys with big guns plenty of times, but to see one pointed and loaded in front of me several times in a day is something else. They had this whole good cop bad cop routine going on, with this obviously American guy who identified himself as a “volunteer” in the army being the good cop and speaking in English, and the bad cop being the above soldier who understood perfectly well what we were saying but wanted to scare us by only barking in Hebrew. And by the way, before it was our turn for special treatment, we had to watch these two guys in a furniture truck be made to unload every piece of furniture and tear open all the wrapping just to “check”. This is ridiculous. I don’t understand any justification for “security” for this. If someone wants to sneak a bomb past a checkpoint, would they really hide it in a piece of
furniture, in 2006? Hello? The only object of this was humiliation, racist humiliation that is state sanctioned. 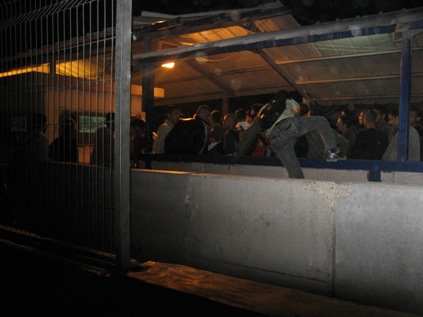 To get back to Ramallah as well we had to go through the Nablus region and through the Huwarra checkpoint, which is another “terminal” style cattle cage, notorious because it is close to an Israeli military base as well as settlements (which always makes it harder for Palestinians to move). This was the second checkpoint of the day, before Qalandia but after Tayaseer (the above). It was raining and of course me and my fellow internationals cut the line with our wonderful blue passports, but we waited right at the other side in solidarity with our Palestinian friends, even though several different soldiers yelled at us to move here and move there, stand here and stand there, why are you standing here, go away, etc etc, and one soldier with a vaguely American accent came up to us and started asking us why we are in this region, and what “tourism” is there to do here. He seemed to be talking as if there are no people in this area, only some kind of subhuman species that happen to be called Palestinians or “Arabs”.

I noticed from here and the Bil’in demo that the “minorities” within the military, women and Israeli Palestinians who volunteer (mostly Druze) are often way meaner than the Jewish men. The women seem to need to prove they’re more manly than the men, so often they’ll enjoy treating Palestinian men worse, and the Druze need to prove they’re just as loyal to Israel as Jews, so they will treat their Arab brothers and sisters like shit as well.

I’m sorry if this post has been a little chronologically scattered, but it’s been really hard for me to write this out. My mind keeps drifting somewhere else because it doesn’t want to relive this again, but I know I need to write it so that you can read it. I’ll try to write more later when I can deal with all this stuff better.

Also, so that you get a better visual sense of what I had to go through in terms of the cantonization of the West Bank by checkpoints and the wall, here is a link to a really useful map:
http://electronicintifada.net /bytopic/maps/372.shtml