This Friday morning villagers from Abud, a village in the West Bank, held their first non-violent demonstration against the construction of the illegal Israeli annexation wall. The wall is threatening to steal agricultural land and water resources from the small Muslim/Christian village of 2500 citizens.

At 10:30 the villagers, accompanied by Israeli and international activists, gathered in front of the local council building and started walking to the construction site of the illegal apartheid wall. At the site, a prayer was conducted by Sheikh Tayeer Tammimi, the imam of al-Aqsa Mosque in Jerusalem, and a speech was held by Atalah Hana, Bishop of Jerusalem and the head of and the Greek Orthodox Church in Palestine. These two events constituted a message of unity among the villagers across religious boundaries.

After the speech, the demonstrators started to entered the construction area by crossing roadblocks, passing Israeli soldiers and almost getting run down by military jeeps driving right into the mass of people. The soldiers continuously threw sound bombs into the crowd and attempted to beat the demonstrators away. Around 12.00 the Israeli military started throwing teargas grenades directly at the demonstrators. A lot of people got tear gased and two Palestinians were hit by the shrapnel from the grenades, but no one was seriously injured.

The demonstration gathered around 300 protesters, among them approximately 40 Israeli and international Human Rights Observers. No one was arrested. Present at the demonstration was Qadurra Fares, member of the Legislative Council and Head of the Office Against the Wall.

For an ISM video of the day, click here:
http://dc.indymedia.org/media/all/display/28064/index.php 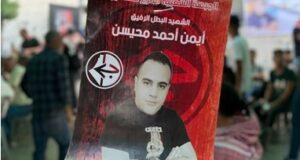