by Asa and Sarah 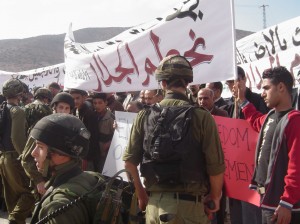 At 11am on Tuesday the 22nd of November residents of the Tubas area held a dignified demonstration against the Israeli checkpoint near Tayasir village. Around 100 Palestinians were joined by about 25 Israeli and international supporters. The shebab (youth) of the region were mostly in school at the time, so the demonstration was mostly made up of mature, respected men of the community as well as several local women.

Protesters marched towards the checkpoint where they significantly outnumbered the IOF presence. It would have been relatively easy for the group to occupy the checkpoint non-violently, which must have been clear to the soldiers too. However, the organisers of the demonstration had decided beforehand on a non-confrontational approach. For around an hour the protesters stood facing the soldiers holding banners and signs with slogans such as “Yes to the application of international law” (in Arabic), and “Checkpoint = Chokepoint” (in English). The protest included a time of prayer for the Muslim men who were in attendance. 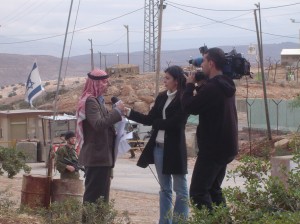 During the quiet assembly, the checkpoint guard continued to increase in number, presumably in anticipation of a checkpoint breach. Also two snipers assumed position on a roof in the military compound and maintained constant sight on the group. The soldiers were to be frustrated that they did not provoke a violent reaction, and the only activity at the checkpoint was the arrival of the Israeli activists who refused to show their IDs while joining the group assembled on the western entrance. There were intervals of chanting and the sound of an F16 and two helicopters flying in the vicinity but otherwise all was calm.

At the signal of the the Palestinian leadership, the assembly dispersed quietly.

The Palestinian Agricultural Relief Committee (PARC) in Tubas organised the demonstration to draw attention to the nature of the occupation in the isolated Tubas region. Over the last year the checkpoint has cut Palestinian villages in the area off from each other and Palestinians from their agricultural land. 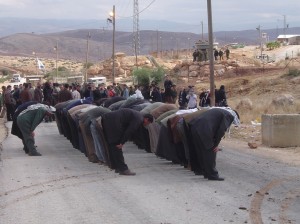 The villages of Bardala, Ein Al Beda, Cardala and Wadi Al Malech are in an enclave in the Jordan Valley, the only entry and exit point to which is the Tayasir checkpoint. Anyone who is not registered on their I.D. card as being from these villages or has a time limited permit is forbidden to enter by the Israeli military. In order to be allowed to move freely many residents of this village have registered there addresses in Tubas itself. Now, if they leave their villages they are forbidden to return.

Tayaseer and Aqaba are in an area considered a “Military Zone”. Occupation officials have made no secret of their opinion that Aqaba “just should not be there”. Recently the military confiscated villagers sheep and burnt there grazing grounds. According to Ha’aretz (26th March 1999), 8 villagers from the village were killed and 43 wounded by the Israeli military between 1967 when they “adopted” it as a training facility and September 2000 when they were forced to pull out after the village brought a successful case against the them to the Israeli high court. More recently, the military declared all the village homes to be “illegally built” and threatened to demolish the whole village, issuing demolition orders in the village. These efforts were defeated by international protests.

Although one village in the area removed the military through legal action, it was clear to us that the region is still very much used by the IOF as a training grounds. The military presence in the air and on the ground during the protest was in stark contrast to the calm face of the locals and the action they orgainsed.