New
Home / Reports / We Shall Overcome 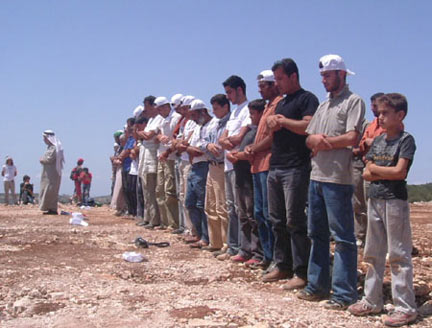 Today was another great picture of peace drawn by the Palestinian, international and Israeli peace activists as we protested against the wall being built on Palestinian land. I thought that, because some of us didn’t know the language of the others, we wouldn’t be able to participate in everything together. But I was wrong. Today, in our peaceful demo against the Apartheid wall in Imatin (Qalqilya district), all of the nationalities were chanting together, united in one voice for the Israeli Occupation Forces to hear.

It was a great moment when our eyes as Palestinian, international and Israeli peace activist met. Then a small smile appeared on our faces while we chanted the peace and freedom cries. A few minutes later, our demo changed into a festival that showed the international community that peace will come from the people who are under the Israeli soldier’s scopes. Many of us prayed at the site as an Imam to offer prayer of hope. This is the real peace that will come from people who have suffered for more than 57 years of Israeli military occupation.

Then our happiness was completed when we saw our friends from the Bil’in village who came to share in the demonstration against the wall. What a nice moment when the Bil’inians, who are also struggling to protect their confiscated land by the Apartheid wall, joined Imatin’s people. All the internationals and Israeli peace activists stood together, refusing to bow to the Israeli government’s brutality.

Now I’m sure that if we seek a real peace, our language will be united. We don’t need to speak Hebrew or English or Arabic. Our beliefs, humanity , smiles, friendship, and solidarity are the only language that we need to speak.

As a Palestinian farmer, I consider defending Palestinian rights as the first step in the process of defending human dignity. We are very proud that we carry the flag of Palestine. We are not defending our rights only, but we are drawing the map for next generation to continue the struggle for justice. We are not the only people who do that; we have internationals, we have Israeli activists, and we have our strong spirit and insistence on freeing our occupied land.

I really was very happy today, but was also very sad for a lot of our international friends who have already left for their countries without living this moment. I’m hoping they can feel our happiness from this peaceful demonstration as they felt out sadness in so many hard times,

After this great day, I really felt that I wanted to write how I felt and to ask our friends to come and share such a nice moment, a moment where you stand side by side with people who proved to the whole world that they want to live together, away from the misleading Israeli propaganda. Both Israeli peace activists and Palestinians showed the world today that they want a life of peace and not of violence, and they want the government of Israel to see we are united in our search for justice.