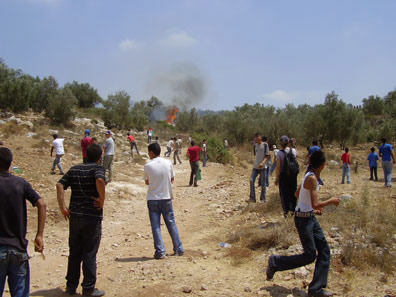 Villagers set fire to some of their own olive trees to send a message to settlers that even if they get the land, they won’t get the agriculture that Palestinian families have spent generations cultivating.

Over 500 villagers from Azzoun demonstrated Friday, August 12, to protest the second stage of the construction of the Apartheid Wall which will confiscate 1200 dunums (about 300 acres) of land on the eastern side of their village.

The demonstrators set fire to their own olive groves as a message to the settlers of Karmeh Shimron, situated on the hilltop directly above their lands, that the Israelis cannot take the trees even if they steal the land. The villagers of Azzoun have already lost 12,000 dunums of fertile land, once abundant with fruits and vegetables, to the Wall, already finished on the western side of the town. The Annexation Wall itself occupies 250 dumuns of land. Azzoun has 10,000 dunums left for the 8,500 people that remain in the village after the wars of 1948 and 1967. 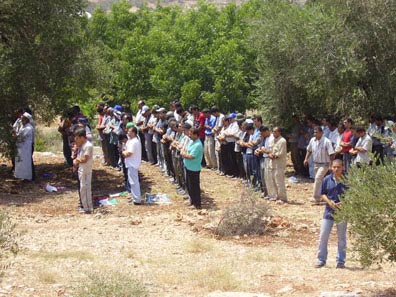 Villagers stop to pray on their land as soliders shoot and launch tear gas canisters in the area. Nine people were injured in the demonstration.

The village has recently obtained a copy of the Israeli government maps which prove that the confiscation of land is for settlement expansion, exposing a plan to build a settler only by-pass which will link the nearby settlements of Itsofin and Ma’ale Shamoron. Additionally, the Israeli government plans to close the main road leading to Nablus, forcing villagers to travel a longer distance and to pay more money for transportation. 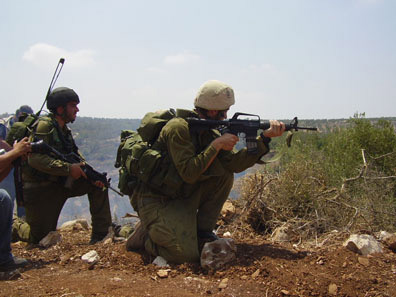 Soldiers take aim at civilian demonstrators who are trying to protect their land from the wall and settlement expansion.

Dozens of Israeli soldiers began shooting tear gas and rubber-coated
bullets, targeting the villagers’ at head level. Nine youth were shot, in
the head, neck and upper back. Sixteen year old Siad Sayel Ali Swedan
remains unconscious in a Nablus hospital. In a phone conversion between
the Mayor of Azzoun and the Military Commander Shannan, known throughout the region for his brutality, the commander said that his soldiers felt threatened by the youth. The Mayor then asked if any soldiers were hurt, since 9 Palestinians had been injured in the demonstration. The commander threatened that to impose curfew on Azzoun, and hung up. Soldiers took up a position on the hilltop near the settlement. Fifteen
ISM and IWPS internationals joined the demonstrators dispersed throughout the olive grove and moved towards the hilltop.

The constant shooting by the army pushed the demonstrators to the bottom of the hill, and the internationals found themselves surrounded. After demanding that the Israeli soldiers stop firing at the villagers, the internationals asked to speak with the General Command. The internationals spoke with Commander Shannan to request a ceasefire to allow for safe passage to return to the bottom of the hill to join the villagers. The shooting resumed quickly, and the villagers organized a mass prayer in the midst of the tear gas and smoke. After several hours of shooting, a fire truck came to extinguish the spreading flames. 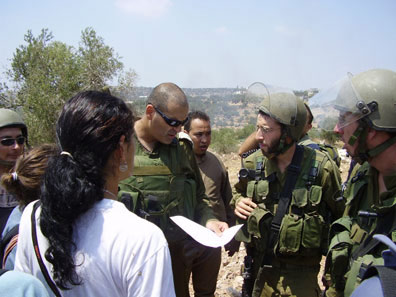 ISM volunteers negotiatiate a five-minute ceasefire with soldiers to allow Palestinians time to leave before they continue to shoot at stone-throwing youths.

The villagers of Azzoun are prepared to fight for their land and freedom,
and are organizing more protest in the upcoming weeks to expose Israel’s “disengagement” policy for the fraud that it is.