New
Home / Reports / My Arrest and Detention by Israeli Police

My Arrest and Detention by Israeli Police 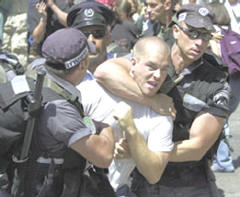 by Andrew Clarno, U of Michigan Sociology Grad Student

On Saturday, August 11, 2001, at about 2:30 pm, Israeli police arrested me while I was standing on the sidewalk at the edge of the American Colony Hotel parking lot.

I had arrived at the American Colony Hotel at around 2:15 pm along with twenty to twenty five other members of the International Solidarity Movement in order to peacefully demonstrate our opposition to the recent Israeli invasion and seizure of the Orient House. For about ten minutes, we witnessed clashes between Orthodox Jews and Palestinian youth and then we began our non-violent protest. As we stood in a line on the sidewalk, holding signs and calling for justice and peace, we were attacked by the police. Without warning in either Arabic or English, the soldiers came towards us, tearing the signs out of the hands of international protesters, while [singling out and] violently pushing and grabbing at Palestinian protesters. We began to chant “No Violence, No Violence”—calling on the police to recognize the non-violent nature of our protest and reinforcing our commitment not to respond violently to the violence used against us by the police. But the assault by the police continued. Soon police were pushing us all down the hill towards the American Colony. I saw several protesters knocked to the ground and kicked by the police while I was being pushed down the sidewalk in a group of protesters.

I had nearly reached the driveway of the American Colony Hotel when a police officer grabbed the beltloop in the back of my jeans with one hand and my right shoulder with his other hand. Although I did not resist, he forcefully dragged me into the street and put my head in a violent chokehold. His tight grip on my neck made breathing nearly impossible as he carried me nearly 100 meters up the hill towards Abu Obeidah street. We turned onto Abu Obeidah street, where the officer shoved me into the back seat of an SUV, then leaned into the front seat and reached around to punch me in the face twice with his left hand.

In all, seven internationals and four Palestinians were arrested at the protest that afternoon. We were all taken to the [former] Russian Compound, [an Israeli area] notorious for the torturous methods of interrogation and the violence perpetrated against prisoners by Israeli guards. One of the Palestinians was then released and the rest of us were charged with illegal assembly. In a seemingly random manner, a few of us were given the additional charge of assaulting a police officer. We were taken to our cells where we were held until 11:00 pm when a judge heard our case and gave the police 24 hours to complete their investigation.

The following day, one Palestinian and one international were released without conditions and five internationals were offered release on condition of not returning to the area of the Orient House. [They reluctantly accepted this unjust offer, but only because their work on the outside is of such immediate importance.] The two Palestinians and I were brought before a judge and the police asked that we be held three days so that they could pursue their investigation of charges that the three of us had attacked police officers. The judge again offered the police 24 hours to produce enough evidence to bring charges against us, so we were returned to our cells and kept in prison another night. On Monday, August 13, 2001, the three of us were again brought before a judge. The police released one of the Palestinians on similar condition as those offered to the internationals the day before.

Regarding the other Palestinian and I, however, the police argued that they had enough evidence to charge us with assaulting the police officers. They asked that we be detained for four days so that they could file charges against us and begin the trial process. The police have taken testimony from a police officer who states that he witnessed me push another police officer. They also presented testimony from the officer that arrested me – the one who grabbed, choked, and punched me. He states that I ignored his requests that I disperse and that I attempted to choke him.

Our attorney, Lea Tsemel, challenged all of this evidence. She highlighted the fact that the arresting officer did not mention this alleged attack in his initial arrest report and that his testimony was taken only after the police had decided to charge me with assault.

Yesterday evening at 7:30 pm, the judge decided that there was enough evidence to charge the two of us with assaulting a police officer, but that there was not enough risk [of flight] to keep us in prison pending further investigation. Therefore, Mahmoud Q. Mahmoud and I were released last night on condition that we not return to the immediate vicinity of the Orient House for forty days and that we agree to show up for further questioning and trial. The police were given forty eight hours to file charges against us—which they have vowed to do.

I insist upon my innocence. I did not physically or in any other way assault or even threaten to assault a police officer or any other individual. I was never given orders to disperse and I did not resist arrest. I have always been a non-violent person and have supported struggles around the world for peace and justice. As part of the International Solidarity Movement Campaign to End the Occupation, I am committed to a program of non-violent actions in support of the Palestinian people in their struggle for national liberation and against the brutality of the Israeli occupation. The violence that day was perpetrated by the Israeli police – not by the protesters. The world has taken notice because the violence was directed against an American citizen and caught on film. But I guarantee that the charges are completely fabricated. I am convinced that they have been designed to undercut the non-violent campaign to end the occupation.