Last Saturday, November 23rd, was ‘Sarah’s day’, a festivity for the Jewish community that gathers Israeli settlers from all around the occupied Palestinian Territories and Jews travelling from abroad, in the Palestinian city of Al Khalil (also known as Hebron). This year in particular, there has been a special effort by the Hebron Fund to bring as many devotees as possible, who converged in the ‘H2’ zone of Al Khalil, including the old city area and all the surrounding illegal Israeli settlements. 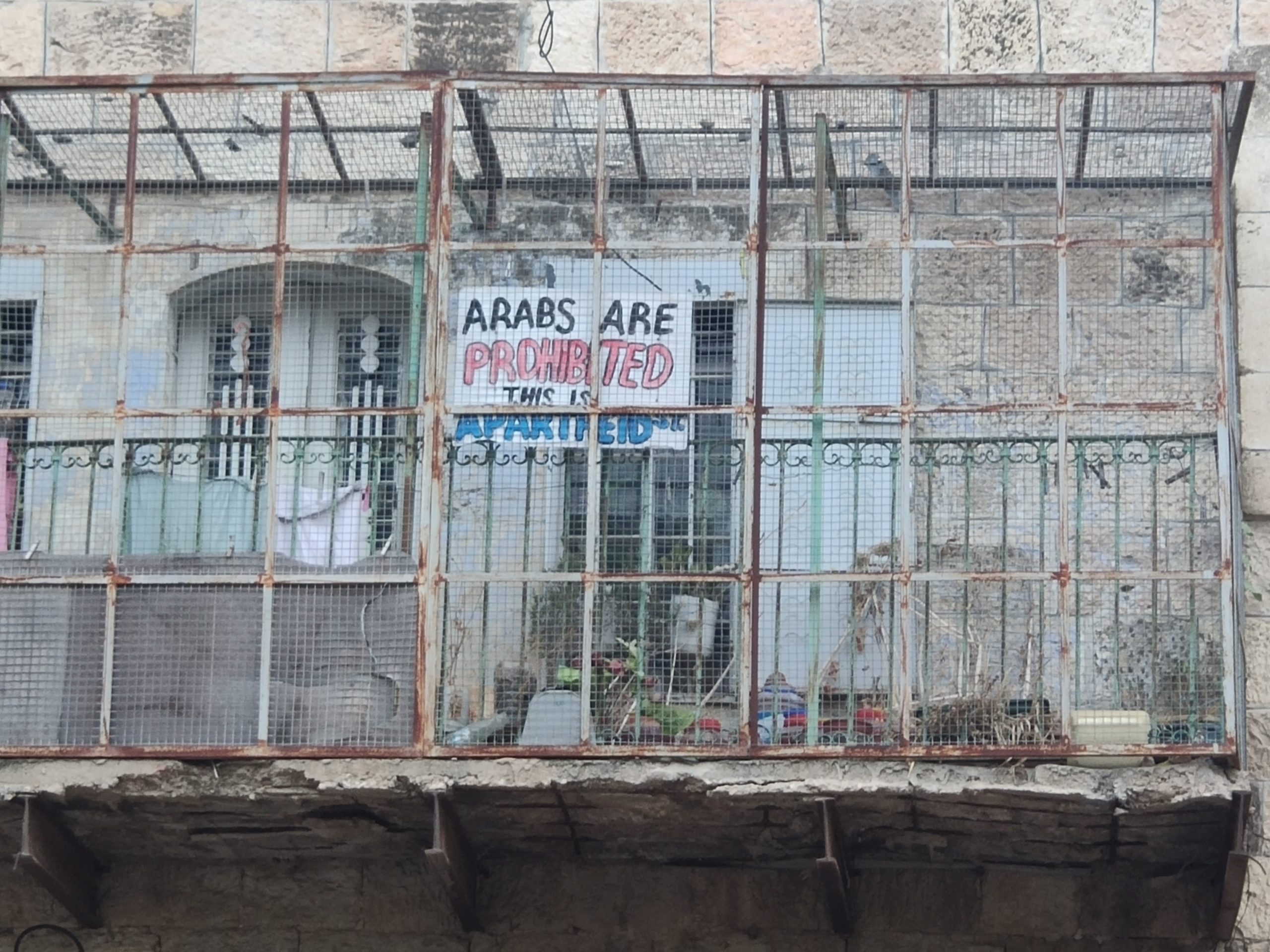 In their daily life, Palestinians’ right of movement in this zone is severely restricted, and at times forbidden. The incoming celebrations worsened, if possible, the situation. In response to the huge influx of settlers and people coming from abroad, military involvement was significantly increased.

The outcome of these three different factors -massive presence of zionists, increased military presence and effective closing down of the area for the Palestinian residents – was a situation in which the incoming crowds were legitimated to do any type of action inside a de-facto ‘amusement-park’, with the complicity of the army, whose effective duty is to control and suppress local people and activists. The situation resembled the conditions under which the first settlement in Hebron was created. In 1968, a group of Israeli zionists reserved hotel rooms in the old city during a Jewish holiday. Their stay evolved into a permanent occupation, protected by Israeli soldiers and endorsed by the Israeli government. 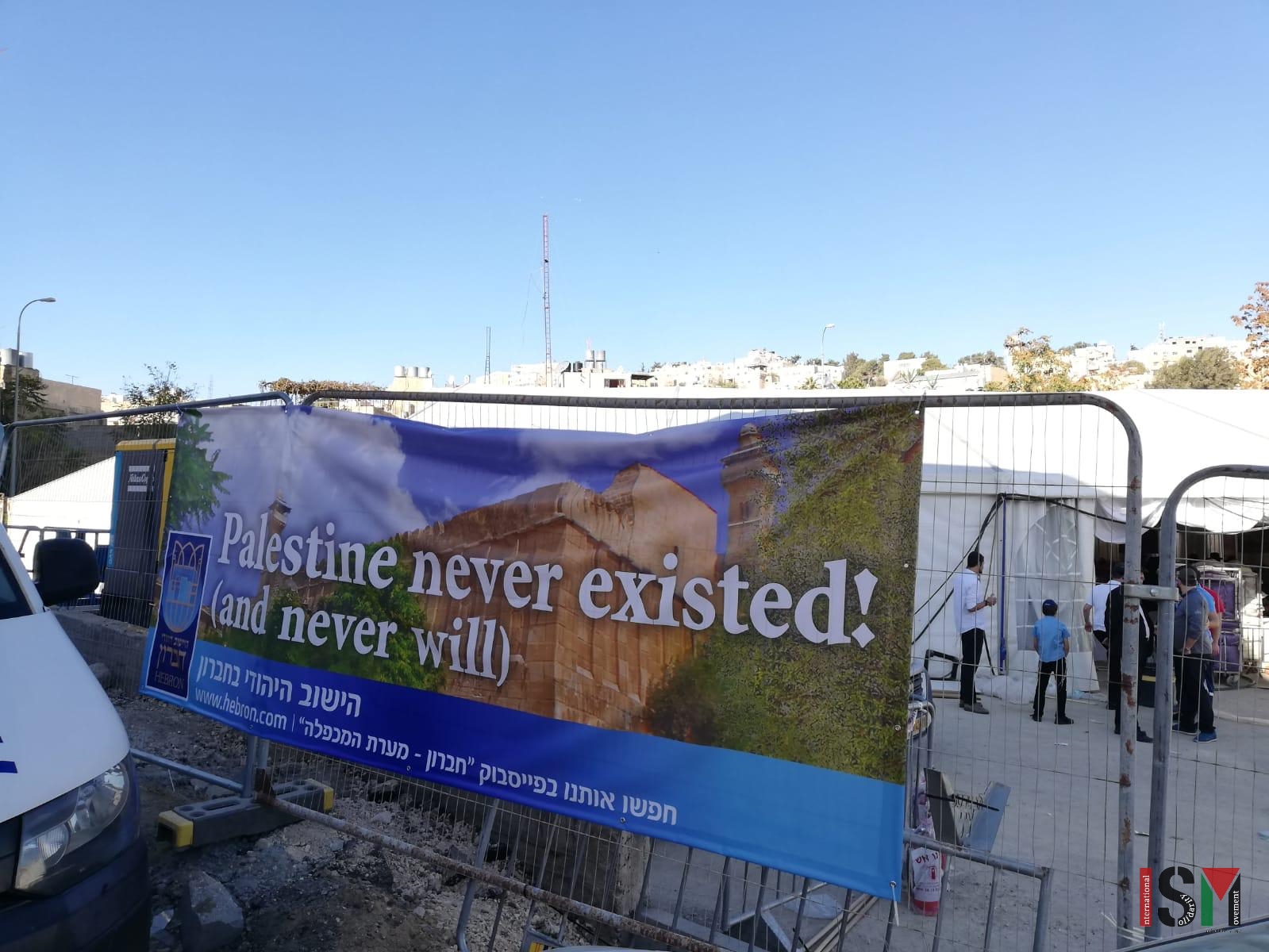 What it was possible to witness from the participants in the Sarah’s day celebrations, seemed to be all the frustration and the rage cumulated during the year, crystallized, materialising into the basest actions, and enabled by an unlimited sense of power. These feelings were exemplified by banners such as “Palestine never existed… and never will” [source: Hebron Fund]. They transformed into overt hostility and aggression against the international activists observing the events. They emerged as physically violent attacks with pepper spray against unarmed Palestinian civilians, including children. This culminated with the stoning of a two-years old sleeping child. 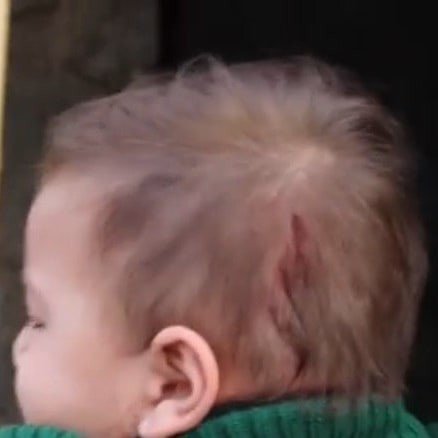 A 2 years old kid stoned by the settlers in Tel Rumeida.

This gathering of zionists seems to flush out all the frustration due to the incompleteness of the apartheid process: the Palestinians in Al Khalil are guilty of not being fully subjugated by the racist policies of the state of Israel, and such a gathering is a good opportunity to remind them of the hierarchy that is supposed to be in place.

In view of all this, several questions are raised.
First of all, of course, why? Why such a rage and such a violent spirit? Does Israel not have enough? Illegally occupying a vast majority of Palestinian land seems not to be sufficient. The real occupation and the true oppression is carried out through the routine and persistent humiliation of Palestinians, and the feeling of impotence with which local people are left after every attack. However, it does not take much time for the Palestinians to resume their usual spirit of resistance. Their resilience is stronger than the fascist soul of a bunch of extremist settlers.

Secondly, what is the role of the Israeli Occupation Forces (IOF) present there? On
Friday afternoon, a group of almost 150 settlers attacked a barber shop on the way to the Kyriat Arba illegal settlement, assaulting the five people inside with pepper spray, wood and furniture. All around, a huge presence of IOF soldiers; did they stop this fascist aggression?

A couple of hours later, a 12 years old child was attacked by a group of settlers, spraying him with pepper spray and kicking him whilst on the ground. Nearby soldiers were stationed at an observation tower 50 meters away; did the soldiers intervene? 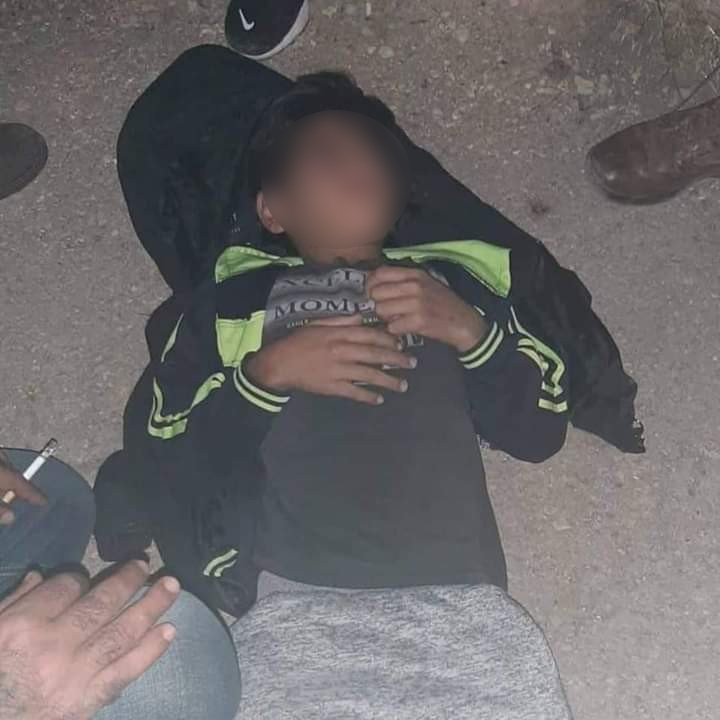 A 12 years old Palestinian kid gased and then kicked by the settlers.

In both cases the soldiers did not stop the violence. They observed, and they waited. They waited and watched while the illegal settlers vented their hatred against the Palestinians. At what expense?

A further, even more extreme example, took place on Saturday afternoon. The family of a Palestinian activist living in the Tel Rumeida neighbour (within the ‘H2’ zone) was gathered together in their home, when a group of settlers climbed on the roof and entered their garden. After shouting verbal abuse, the settlers began to throw stones at the house, the family came outside trying, in vain, to convince them to go away. One of the stones passed, not by chance, through a window and hit the two year old nephew of the activist, who was sleeping inside. The soldiers were on the rooftop, “containing” (i.e. observing) the settlers. A Palestinian ambulance could not reach Tel Rumeida: Palestinians are forbidden to drive inside ‘H2’. The only way for the family of the injured child to get him to safety and medical treatment, was to hold him and run, through the throngs of yelling settlers, towards the closest checkpoint. Then they could only hope for the medics to be able to pass the control and take the child. There are at least two past examples this not being possible. In one case, the victim died waiting at the checkpoint. On this occasion, mercifully the child could reach the ambulance, and the medical staff were able to take him to the waiting ambulance. 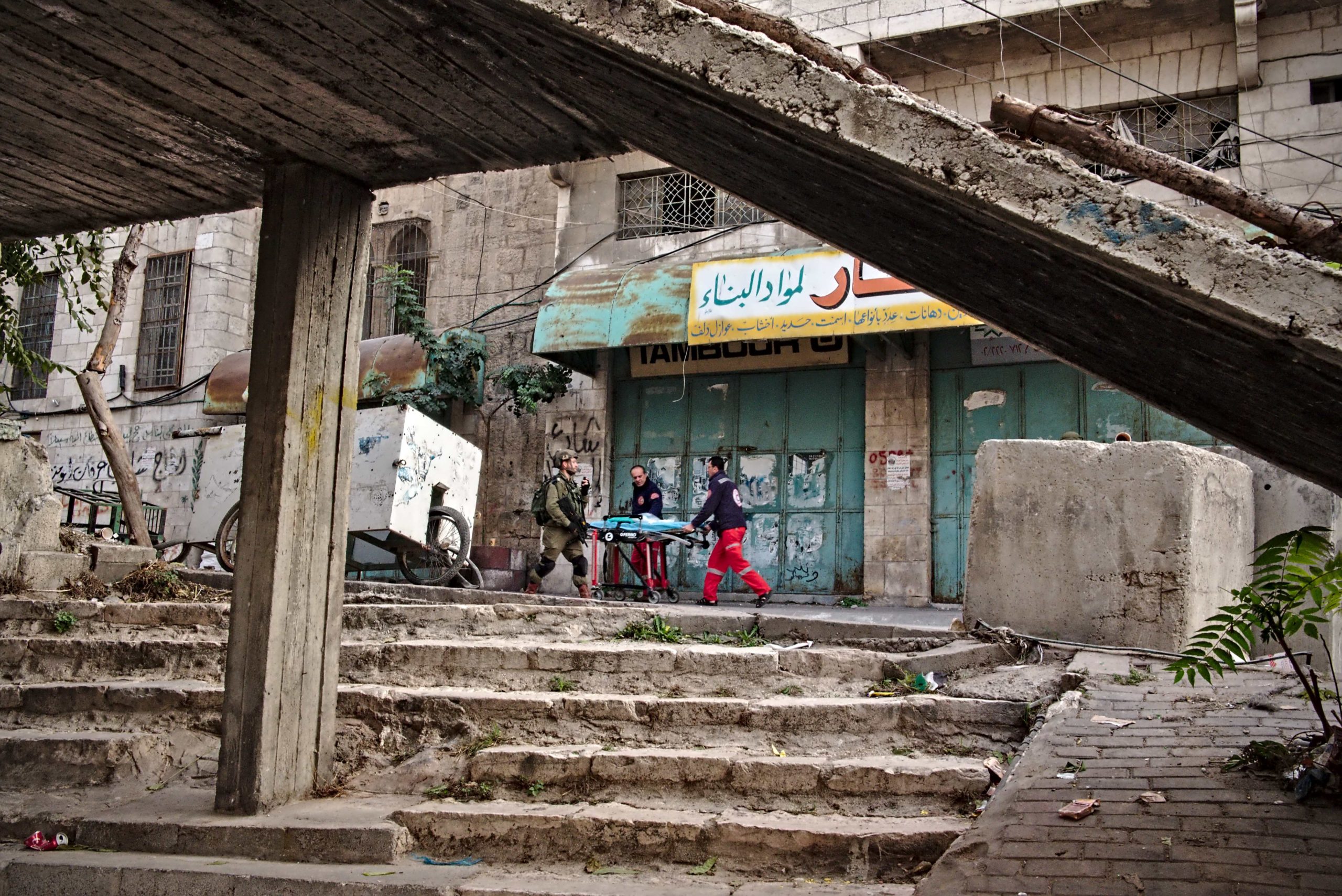 Hence it seems clear that the role of the IOF is not to prevent clashes. Not even to defend the Israelis. Their role is to indulge the settlers, whatever the price to pay for the others. In their amusement-park there is no place for disrupters, such as activists, adult and child Palestinians, who are systematically and brutally repressed. 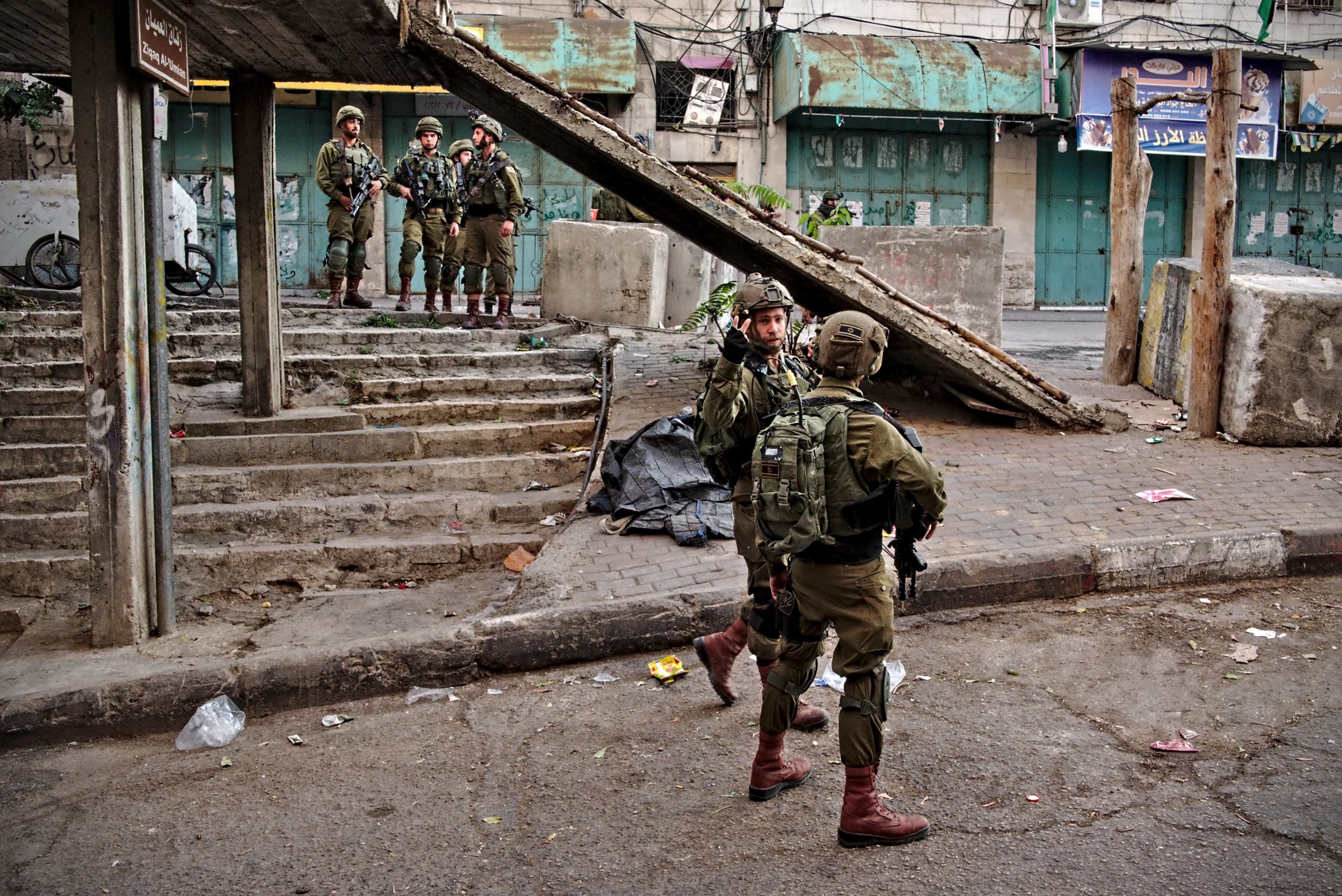 In the end, what should Palestinians do in order not just to be spectators of their own everlasting humiliation? The answer is more complicated than ever. As time passes by, the imbalance of power shifts further away from them, as the recent US declaration highlights. Active resistance is undermined by both the continued oppression of the Israeli police and the internal conflicts within the Palestinians factions. The presence of international activists helps in documenting the constant violations of basic rights, but is certainly not enough to change the inertia of the dynamics. While hope for change by pure political means weakens, space is created for more radical, and sometimes more appealing, answers based on the juxtaposition of Islamist ideas to the zionist arguments. The international powers, focused on the pure capitalistic interest of maintaining good relationships with Israel as an ally, are responsible for this radicalisation. They, and all those who turn a blind eye to the injustices happening here lose the right to judge the Palestinian means of resistance, in the face of an oppression in which they are accomplices.